Responding to a media frenzy around allegations that Russians supported her campaign with a small number of documented social media posts, former Green Party Presidential nominee Jill Stein pointed out that the report from the New Knowledge cybersecurity firm was effectively invalidated by revelations of the firm’s own election meddling. The New York Times reported that New Knowledge “orchestrated an elaborate false flag operation” creating an impression of Russian interference in the 2017 US Senate election in Alabama. Stein added, “It’s all the more damning that the firm’s election meddling was sponsored by partisan Democratic funders.” Facebook has just suspended the account of the CEO of New Knowledge for his involvement in the secret scheme.

Stein stated, “A report on election interference, issued by a partisan firm directly implicated in election interference, is simply not credible and should be rejected out of hand. In addition, the report is misleading, biased through selective use of facts, and misrepresents the nature of internet communications. The use of this tainted report by uncritical corporate media outlets to smear Green political opposition and peace advocacy speaks volumes about the dangerous new McCarthyism that is threatening our democracy and pushing us towards greater militarism that is already bankrupting us at home and wrecking havoc abroad.”

Today Green Party 2016 presidential candidate Jill Stein announced that she has completed handing over emails and other documents in response to the Senate Intelligence Committee’s request for information pertaining to Russian interference in the 2016 election.

Stein reiterated her strong support for legitimate inquiry into corruption, quid pro quo deals, money laundering, obstruction of justice and other illegal activity in the 2016 election. She cautioned, however, against over-reach and misuse of “Russiagate” to promote warmongering, censorship, and suppression of opposition to the political establishment. To that effect, she warned, “Russiagate” is both symptom and further cause of our current state of rampant militarism that is harming our democracy.

Stein also noted that explosive conditions in Syria illustrate the danger of “Russiagate” warmongering. She emphasized that US-Russian dialogue is critically important, as it was in the Cuban missile crisis of 1962, with diplomacy being the only effective pathway to solving the expanding crises of war, nuclear confrontation and climate catastrophe.

Stein observed that concerns about election interference - whether by foreign governments, criminal networks, domestic partisans, voter suppression schemes or other sources - are not diminishing as the 2018 midterms approach.The Cambridge Analytica-Facebook scandal in particular adds to growing concerns. She called for a nonpartisan Emergency Commission for Election Protection and Voting Justice to ensure the right of every American to “a vote we can trust - that is accurate, secure and just.” Stein herself is overseeing the only known post-election investigation of potential voting machine hacking in 2016.

While providing documents responsive to the Committee's requests, Stein objected to requests for constitutionally protected materials, including the improper request by the bipartisan committee for internal policy deliberations of her campaign, the flagship for an opposition political party. She declined to provide this material, noting the request intrudes into the First Amendment rights of political and associational freedom that are critical to political liberty for all Americans. Such Constitutional threats add to the dangerous current climate in which progressive political opposition, social movements, and the anti-war community are being targeted with censorship, surveillance and political intimidation.

Stein’s proposals to protect elections, civil liberties and democracy without resorting to warmongering, censorship or repression are addressed in a longer statement that can be found at https://www.jill2016.com/stein_senate_statement.

Over a year after the historic effort to recount the 2016 vote, our legal team is still at work in Wisconsin and Pennsylvania fighting for an election system that is accurate, secure and just - and free from interference by any intruders, whether foreign or domestic!

Towards that end, we now have the exciting opportunity to conduct a groundbreaking state-wide examination of the voting machine “source code” - a crucial piece of voting machine software which controls the actual counting and tallying of the votes.

Incredibly, the source code for voting software has never before been examined for evidence of tampering or errors that would compromise an election!

Click here to read a full transcript of this video.

Responding to a Senate Select Committee on Intelligence request for documents pertaining to interference in the 2016 election, former Green Party Presidential candidate Jill Stein said she is cooperating by sharing all communications relevant to the committee’s mission. “We take seriously the issue of potential interference in our elections, as demonstrated by our continuing efforts to investigate the integrity of the 2016 election and examine our voting machines that are widely known to be vulnerable, but which still have not been examined for evidence of interference. To restore trust in our elections and democracy itself, we must safeguard our elections from all potential sources of interference, whether by foreign state actors or domestic political partisans, criminal networks, lone wolves, or private corporations - including those who control voting software.”

“Our campaign has observed the highest standards of transparency and integrity in our interactions with foreign nationals as well as Americans. Our communications with Russian individuals regarding an invitation to speak on international relations at the RT 10th anniversary media conference will confirm what we stated publicly at that time and since: that we did not accept any payment or even reimbursement for the trip, and that we made the trip with the goal of reaching an international audience and Russian officials with a message of Middle East peace, diplomacy, and cooperation against the urgent threat of climate change, consistent with long-standing Green principles and policies.”

“We strongly support legitimate inquiry into any illegal activity in our elections - including quid pro quo deals, money laundering, corruption and violation of campaign finance laws. At the same time, we caution against the politicization, sensationalism and collapse of journalistic standards that has plagued media coverage of the investigation. In the current climate of attacks on our civil liberties, with the emergence of censorship in social media and the press, criminalization of protest, militarization of police and massive expansion of the surveillance state, we must guard against the potential for these investigations to be used to intimidate and silence principled opposition to the political establishment.”

Stein said that she would release a more comprehensive statement about the investigation in the near future. 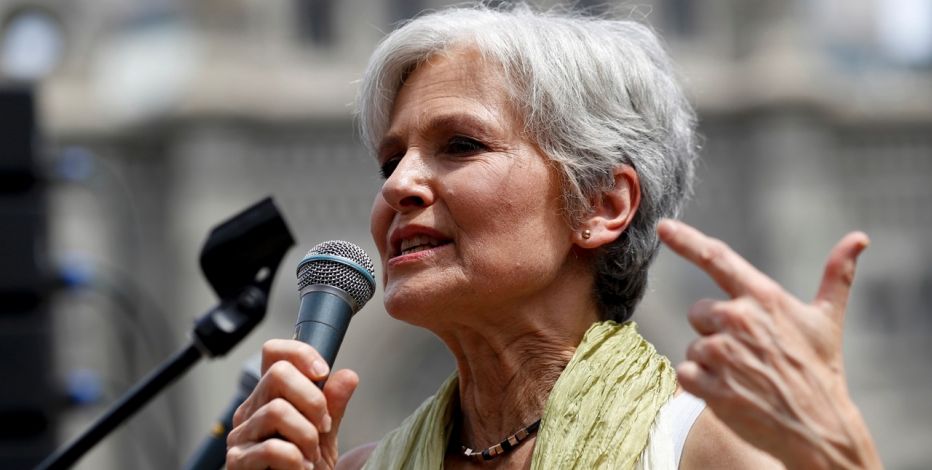 Former Green party presidential candidate Jill Stein says if the reports are true and President Trump withdraws from the 195-nation Paris accord agreement aimed at reducing gas emissions, he will in return “lock us into a horrific future of catastrophic climate change.”

“The longer we delay action, the more catastrophic climate change will be. Water and temperature levels will soar in the next decades. The sixth mass extinction of species will accelerate, which will render the chances for human survival precarious at best. The issue is how many people will needlessly be forced to deal with – to die from - the ravages of extreme weather, droughts, famine, forced migrations, spread of diseases, and wars over access to land and water. And in Trump’s world, it will be the poor and vulnerable communities that most bear the pain, starting with the developing nations that will cross the threshold to catastrophe within the next 5 years,” Stein tells FOX BUSINESS. 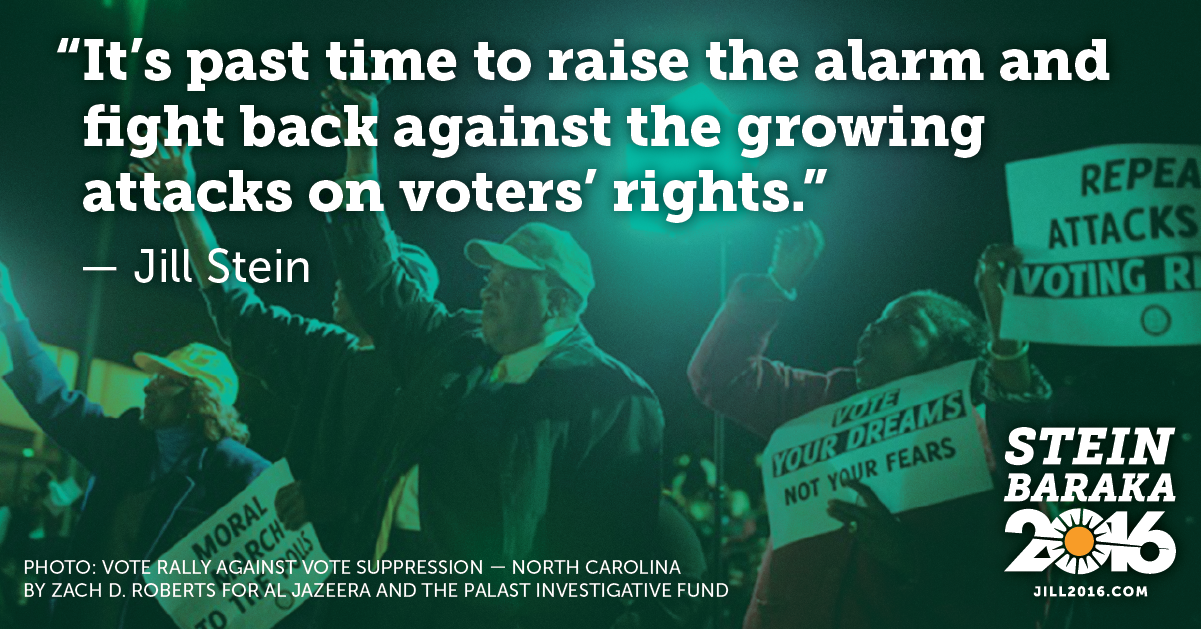 After Trump and his team fought tooth and nail against election integrity efforts in 2016, his attempt to brand a voter suppression campaign as “election integrity” has zero credibility right from the start.

Trump has appointed as vice chair of the commission Kris Kobach, the Kansas Secretary of State who has spearheaded the most extreme voter suppression campaigns since the Jim Crow era, including the Interstate Crosscheck program that disenfranchised up to 1.1 million voters in the 2016 election. 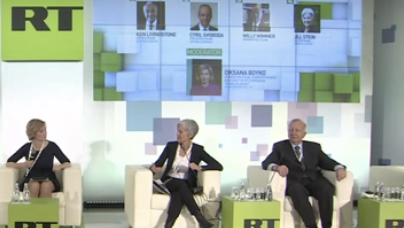 (MOSCOW) United States foreign policy in the Middle East is failing badly because it is built upon a futile quest for military and economic domination, according to Green Party presidential candidate Jill Stein.

Speaking as part of a panel of foreign policy experts at a forum organized by the RT news network, Stein said that solutions to problems such as jihadi terrorism would require Russia and the United States to work together, shedding outdated cold war attitudes that prevented collaboration on problems facing both nations.

Read more
Brief in Support of Our Motion in Federal Court

From the inception of the recount efforts, we made it clear that we were committed to ensuring the integrity of the elections, and that we were not trying to change the outcome.

In that spirit, we are continuing to fight for voting justice in federal court. Here is a link to our latest brief.

In essence, our case challenges the unfairness of Pennsylvania’s election system as a whole.  Forcing voters to use unreliable machines that don’t work, and then preventing voters from taking meaningful steps to ensure that their votes count, is simply not fair.  The Constitution protects not just the right to vote, but the right to have your vote count.

Following the November 2016 General Election, Green Party Presidential candidate Jill Stein requested a recount in Wisconsin, for reasons laid out in the following report. The 2016 election in Wisconsin was remarkable for a number of reasons: the lowest voter turnout in decades, draconian new voter ID laws, and unusual and unexpected results in the Presidential contest, to name a few.

Because the recount did not change the winner of Wisconsin’s electoral vote, state officials maintain that the election processes were satisfactory. Nothing could be further from the truth. The following report documents the many inadequacies and oversights generally accepted as routine by our election administrators.