Scientists have reported a surge in global emissions of the potent greenhouse gas methane over the past decade, with the United States responsible for as much as 60% of the growth.

This methane surge shows that fracking isn’t just a dire threat to our health and drinking water. It’s far worse for our climate than than the industry will admit.

Join Jill Stein's call to ban all new fracking now, and begin an immediate transition to 100% clean renewable energy by 2030! 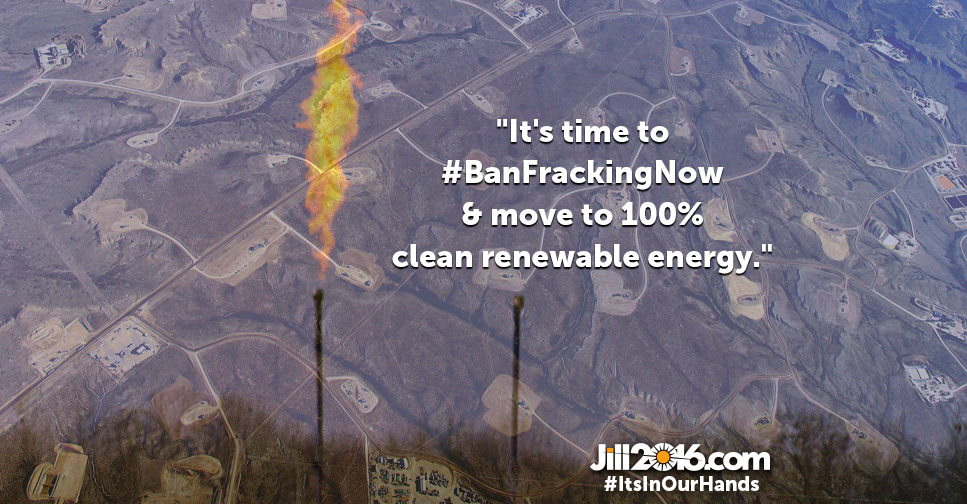 Problem is, there’s no such thing. Fracking pumps huge amounts of the potent greenhouse gas methane (natural gas) into the atmosphere. Hillary’s declaration of support for fracking follows shortly after recent scientific reports of a surge in global methane emissions over the past decade, with the United States responsible for as much as 60% of the growth.

This methane surge shows that fracking isn’t just a dire threat to our health and drinking water. It’s far worse for our climate than than the industry - or Hillary - will admit.

We can’t let Hillary Clinton or her GOP counterparts help the fossil fuel industry hush up the dangers of fracking.

To give you an idea of just how deadly methane is to our planet, methane is 86 times more potent than carbon dioxide as a global warming agent over a twenty year period.

Especially now that we’ve just experienced the worst methane leak in US history in California, it’s past time to end fracking’s threat to our health and our environment.

The Porter Ranch methane leak lasted four months and pumped pollution into the atmosphere equivalent to a year’s worth of emissions from 440,000 cars, sickening local residents and forcing the evacuation of thousands. The scary thing is, the aging Porter Ranch storage facility is only one of hundreds that could develop a leak at any time.

And as bad as the Porter Ranch leak was, fracked gas wells in Texas belch even more methane into our atmosphere every day! While at its peak the California leak spewed 58,000 kilograms of natural gas per hour, some 60,000 kilograms escape every hour from the 25,000 wells in the Barnett Shale.

Here’s the harsh reality: business-as-usual causes more pollution than the worst leak in US history. Fracking is a clear and present danger to our climate.

The fossil fuel industry wants us to believe that burning natural gas is better for the environment. That’s pure propaganda.

In the real world, wells leak and pipelines spill. The supposed climate benefits of burning natural gas are being revealed as nothing more than greenwashing by the fossil fuel industry.

Think about this: these new methane findings follow a NASA report that January 2016 was the warmest January on record by far, following a record-setting 2015. Now that record has just been shattered by an even warmer February.

The dangerous state of our natural gas infrastructure and rapidly accelerating climate meltdown are urgent wake up calls for the country.

We must ban fracking and move away from natural gas, oil, coal and nuclear power as quickly as possible to ensure a livable world for present and future generations.

My Green New Deal will accomplish this by putting millions of Americans to work in an emergency transition to 100% clean renewable energy by 2030.

Sign and share my call to ban fracking now and begin an immediate transition to 100% clean renewable energy by 2030!

Thank you for all that you do to stop the engines of ecological destruction and fight for a livable world for our children.