After the epic failure of the corporate-friendly Paris Climate Summit to produce a binding, substantive treaty, we the people must lead the way to end the use of destructive fossil fuels and choose a just and clean energy future. 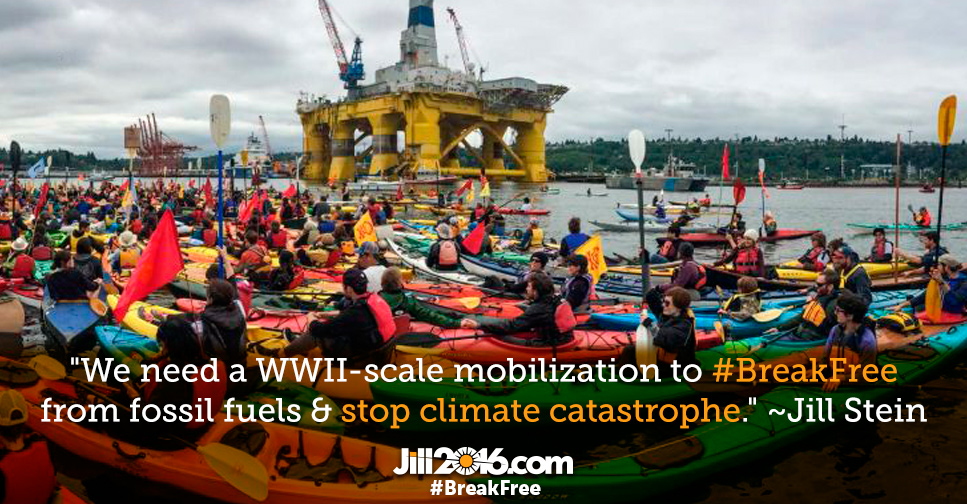 Unless America rapidly and radically alters course, we are headed towards climate catastrophe.

That’s why I’m headed to Washington State to support the international Break Free from Fossil Fuels campaign. I’m excited to join the Indigenous Day of Action march and rally in Anacortes, WA on Saturday May 14.

The National Oceanic and Atmospheric Administration earlier this month warned that sea levels could rise by roughly three meters or nine feet by 2050-2060, confirming a warning from Dr. James Hansen and other leading scientists.

This news is the equivalent of a World War II attack not merely on Pearl Harbor, but on all harbors.

In other words, this foretells events so catastrophic, they cannot be allowed to occur.

From May 4th to 15, climate justice activists are mobilizing worldwide to keep fossil fuels in the ground and accelerate a just transition to 100% renewable energy and a sustainable future for us all. Direct actions – including nonviolent civil disobedience - are being planned at locations all over the world.

I urge everyone who is able to participate in the six regional demonstrations being planned across the US. I’m taking part in demonstrations at the Shell and Tesoro refineries near Anacortes, WA which are the largest source of carbon pollution in the Northwest and refine 47% of all the gas and diesel consumed in the region.

Other major US actions will take place in Los Angeles; Albany NY; Chicago; DC; and Denver.

Transitioning to 100% clean energy is the path to full employment and a healthier community. It's also the only way forward to a future in which we can survive and thrive.

We need to mobilize like we did after Pearl Harbor to rapidly transition to 100% clean energy.

Please help us build the movement to make it happen by signing and sharing my call for a Green New Deal today!

Climate change is the single greatest threat to the survival of humanity on the planet. It requires immediate action for a revolutionary transformation of our society. I hope you'll join me to make that transformation happen.