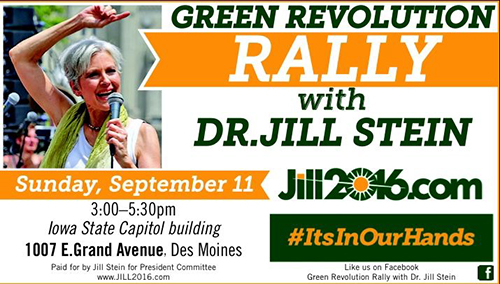 On Sunday, September 11th, Dr Jill Stein, the 2016 Green Presidential Candidate, will be making a campaign stop at the State Capital building in Des Moines.

The rally will be held on the West Terrace beginning at 3:00 pm.

Dr Jill Stein, who recently spent time with the Standing Rock Sioux Nation, will speak about how the Dakota Access Pipeline will affect Iowa.

Regarding the charges being sought by North Dakota authors, Dr Stein stated ”I hope the North Dakota authorities press charges against the real vandalism taking place at the Standing Rock Sioux reservation: the bulldozing of sacred burial sites and the unleashing of vicious attack dogs. I hope they take action against the Dakota Access Pipeline company that is endangering drinking water not only for the Standing Rock Sioux, but for millions of people downstream of the reservation who depend on the Missouri River.”

She will also speak about her vision for America and the role of third parties in America.

The Stein / Baraka ticket will be on the ballot in 48 states, including the District of Columbia, the most ever for a Green Party presidential candidate. If the League of Women Voters were still sponsoring the presidential debates instead of the corrupt Commission on Presidential Debates, both Dr Stein and Gary Johnson (the Libertarian candidate) would be included.