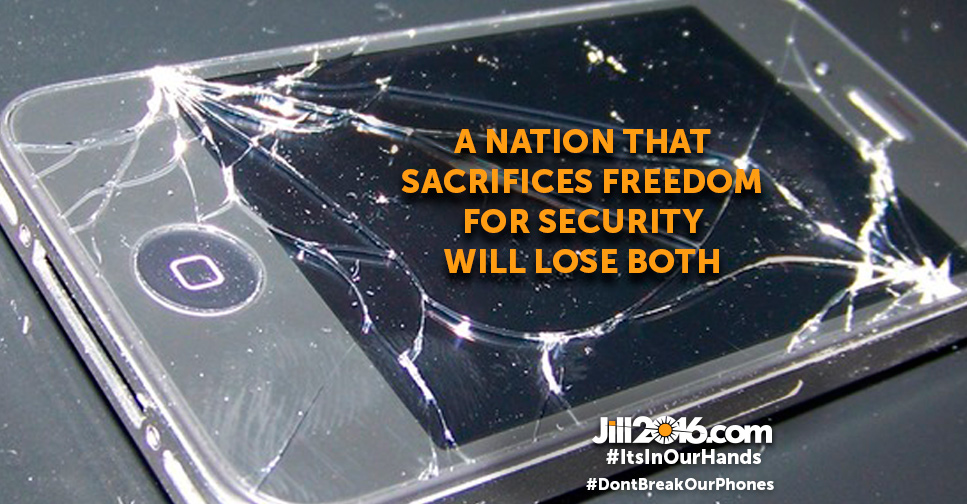 The FBI is suing Apple to design tools for the government to overcome the security features of the iPhone.

This would expose millions of people to government surveillance, and set a precedent for government to force companies to design products expanding spying on citizens. Once unleashed, this power will be used by intelligence services worldwide against dissidents and political opponents.

Stand with Jill Stein: the FBI should drop its lawsuit against Apple now!

Green Party Presidential candidate Jill Stein said today that the FBI should drop its lawsuit that would force Apple Inc. to design tools to overcome the security features of the iPhone. The FBI wants this software to investigate an iPhone belonging to one of the San Bernardino shooters.

"This is a milestone case that will determine whether governments all over the world will be able to invade the privacy of their citizens by forcing companies to deliberately weaken protections built into their products," Stein noted. "Even worse, it would set a frightening precedent allowing big government to compel private companies to design products expanding government spying on private citizens."

"The questionable value to the FBI investigation of breaching the security of this one device does not justify the possible exposure of millions of people to government invasion of privacy. When a copy of the tool the FBI wants Apple to create is obtained by foreign intelligence services, dictatorial regimes worldwide will be able to use it against dissidents and political opponents - not to mention American visitors and businesses."

Stein said that if the FBI lawsuit succeeds, it would have a chilling effect on efforts by US-based companies to build strong privacy protection into their products.

"The appetite of the FBI and CIA for data on our citizens is limitless, and this case is only the latest of their assaults upon our privacy. Real terrorists can move on to other encryption techniques that are beyond the reach of the FBI. It is the American people who will ultimately be the ones exposed by this move."

"We have to accept limits on the reach of the secret police and the surveillance state. This is where we have to draw the line," Stein asserted. "General Michael Hayden, former director of the NSA and CIA recently made this point, declaring that FBI Director Jim Comey is wrong in pushing for a backdoor to Apple's iphone, because on balance, America is more secure with unbreakable end to end encryption."

"As president, I would order the FBI to cease and desist in all lawsuits of this type. They have ample investigatory options without forcing companies to create software that destroys the limited protections we have against government invasion of privacy. As Benjamin Franklin noted centuries ago, a nation that sacrifices freedom for security will wind up losing them both."