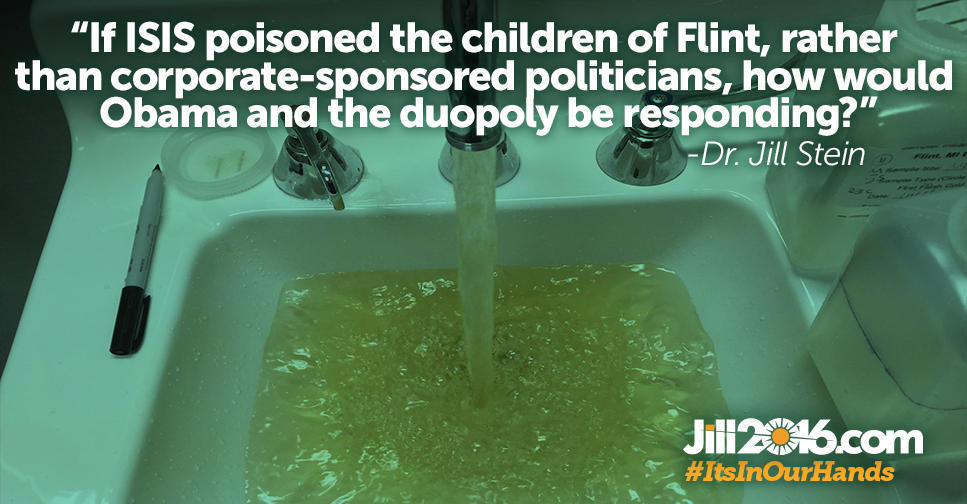 Stand with Jill Stein in calling for Michigan Governor Rick Snyder, and other public officials who knew about the water poisoning in Flint but failed to act, to be criminally prosecuted.

We need immediate federal and state intervention to resolve Flint’s water crisis, as well as a massive federal investment in the nation’s crumbling water system.

Dr. Jill Stein, a Harvard-trained medical doctor seeking the Green Party nomination for President, expressed outrage today at the recent life-threatening news from Flint, Michigan: lead concentrations in the drinking water of some residents are so high that EPA considers it “hazardous waste.“

"No human being should be condemned to drink water contaminated by a neurotoxin,” said Stein.

Stein called for the governor and other public officials who knew about the water poisoning but failed to act to be criminally prosecuted.

While Stein called for immediate federal and state intervention to resolve Flint’s water crisis, she called for a massive federal investment in the nation’s crumbling water system.

The decision to switch Flint’s water supply source to save money was made two years ago by a receiver appointed by the Governor. The problems were immediate: high levels of E. Coli bacteria that led to three boil-water advisories, and the discovery of trihalomethane (a carcinogenic byproduct of chlorine added to kill the bacteria) levels that put the city in in violation of the Safe Drinking Water Act - even before the detection of lead.  The governor and other officials failed to take action despite knowing about the lead contamination."

Stein continued, "The Flint crisis is the logical outcome of decades of betrayal by the bipartisan political establishment serving the economic elite: deindustrialization and disinvestment, abandonment of democracy and neglect of the lives and well being of poor people and communities of color." The auto industry left Flint to rust: the city went from 80,000 union jobs in 1978 to 8,000 in 2006. Flint has a 40% poverty rate, 15% of homes are abandoned, and high violent crime rates accompany some of the most expensive water and sewer rates in the country (ranging from $150-$300 per month).

The high water rates are a national problem, part of the national infrastructure crisis. Flint is an especially egregious case with 600 miles of poorly maintained, crumbling pipes, leading to hundred of water main breaks per year.

“The federal government reduced spending on water and wastewater systems by 80% between 1977 and 2014. Revolving loan funds replaced grants to municipalities that led to doubling and tripling of water rates across the country, and the current affordability crisis," said Steve Breyman, science professor and adviser to the Stein campaign.

"The water crisis shows what happens when governors such as Rick Snyder suspend local self-governance. Appointed executives do not answer to the city’s voters. It also shows what happens when state bureaucracies—the Michigan Department of Environmental Quality in this case—deny the truth," Breyman continued. Long after the lead poisoning was discovered by a local physician, the DEQ maintained that the water was safe to drink.

"Bottled water will not solve Flint or America’s infrastructure crisis. Instead,” said Stein, “a Green New Deal—complete with adequate public infrastructure spending, living wage jobs, a just economy, and the end of poverty—is what Americans want, need, and deserve.”