Greetings from the COP21 Climate Summit in Paris! 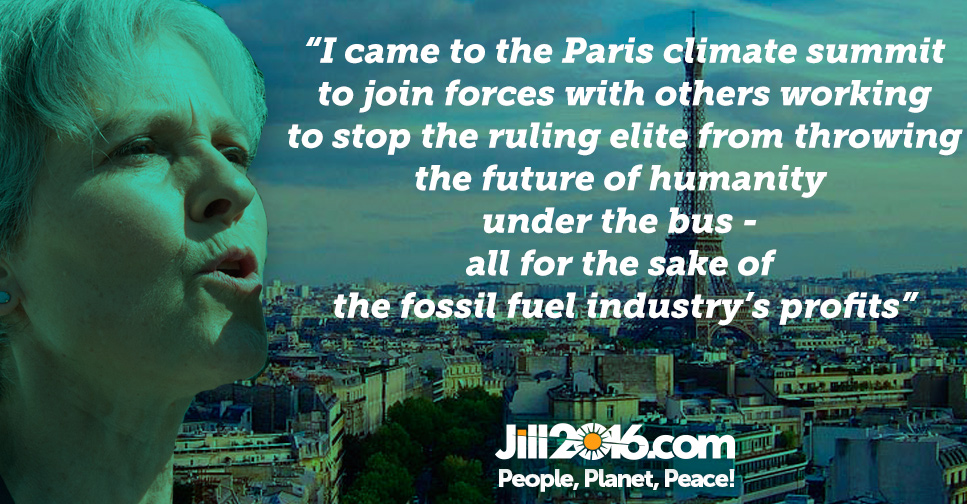 I’m writing to you from Paris, where I just arrived for the COP21 UN Climate Summit. Thank you so much to all of you who donated to make this important campaign trip happen!

The next few days will be a whirlwind, so I wanted to take a moment now to let you know what I’ll be doing here in Paris and what I expect from COP21.

First, the big picture: the widely expected result from COP21 is a set of voluntary, unenforceable pledges from each country to reduce long-term emissions. Even if followed, these weak agreements would fail to limit global warming to 2 degrees Celsius.

The US government’s pledge is shamefully weak, especially considering our historical status as the biggest climate polluter and our incredible untapped potential, as the world’s richest country, to transition rapidly to a low-carbon economy. The proposed US targets for emissions reduction are less than half what the European Union is offering.

Climate change is an urgent, life-or-death issue. That’s why I signed a pledge to not accept campaign contributions from the fossil fuel industry - a pledge Democratic front-runner Hillary Clinton refuses to sign.

To leave future generations a livable world, we need to transition to 100% clean renewable energy by 2030. My Green New Deal plan would accomplish that, and put millions of Americans to work building the transition to a sustainable society.

I came to Paris to join forces with others working to stop the ruling elite from throwing the future of humanity under the bus - all for the sake of the fossil fuel industry’s profits.

I’m excited to meet with leaders of the Global Green movement, like Caroline Lucas, who overcame an essentially two-party system to become the UK’s first Green member of parliament; Elizabeth May, who did the same in Canada; and Christine Milne, former Australian Senator and leader of Australia’s Greens.

I’ll march with the Global Greens at the People’s Climate Summit and speak on two panels on climate and militarism, highlighting the huge progress the US could make towards climate justice by cutting bloated military spending and reinvesting in sustainable technologies.

I’ll take part in a general assembly at the Climate Action Zone in Paris with activist networks and artists from around the world.

And I’ll speak at a major forum addressing bold solutions to the climate crisis including China’s recent national shift toward renewable energy, as well as our own Green New Deal plan There I plan to meet with Celine Cousteau, environmentalist daughter of Jacques Cousteau; Su Wei, China’s lead climate negotiator; and the presidents of Bhutan (the first country to implement a Gross National Happiness Index) and Iceland (where a Left-Green government recovered from financial crisis by bailing out the people and prosecuting bankers).

Most importantly, I’m here to bring our collective voice for people, planet, and peace to a global gathering that holds the fate of the world in the balance.

Stay tuned for more updates from Paris, and let’s keep building the movement for climate justice together.