As the Stein/Baraka campaign for people, planet and peace over profit has grown, we've started attracting some serious pushback from the corporate media and political establishment.

We think it's a sign of progress that they're starting to fight us, so we're putting all of our responses to these haters on one blog.

We present to you Haters Gonna Hate.

We hope this will help you see through the negativity and spin - and help others to do the same.

No societal transformation is inevitable without a committed group of people actively working to create a new way of being. Please share the information on this blog to counter the misinformation and highlight our movement for a just, compassionate world.

Four months since the upset election of Donald Trump over Hillary Clinton, one of the primary scapegoats of the Democrats for its stunning electoral failure remains the Green Party and its 2016 presidential nominee, Jill Stein. Pointing to final vote tallies in Pennsylvania, Wisconsin and Michigan that showed Trump’s margin of victory as being below the total vote count for Stein, Democrats have coalesced around the conventional wisdom that Stein voters flipped the election by failing to unite behind the Democratic nominee. 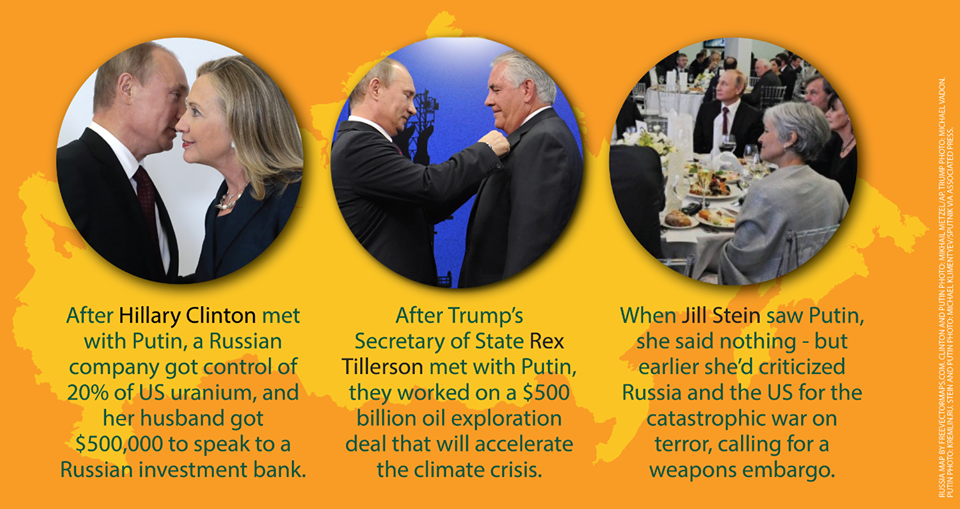 The Daily Beast ran a deceptively framed article about Jill Stein and her husband's investments in mutual funds. The article not only put a deceptive spin on this story, it didn't disclose Chelsea Clinton's position on the board of directors of the Daily Beast's parent corporation, or that its author served as a campaign chair on Hillary Clinton's 2008 presidential campaign.

John Oliver, host of Last Week Tonight, ran a segment on his show to discourage viewers unhappy with Clinton and Trump from voting outside the 2-party system. Oliver focused on Jill Stein's proposal to cancel student debt for a misleading attack.

Sometime in 2016 a rumor began circling the Internet and hostile media that Dr. Stein opposes the use of vaccines. With no evidence of this, this claim was rated false by the fact-checking website Snopes.com. A leaked email from a Democratic operative revealed that those spreading this claim knew it was baseless, but did so anyway in order to spread misinformation and doubt among those considering a Green vote.

Former Vice President Al Gore has been repeating the claim that the reason George W. Bush became President is that Ralph Nader's Green campaign took votes that rightfully belonged to him, a myth that has been roundly debunked from all sides. In this response, Jill Stein asks why Gore isn't advocating for ranked choice voting, which would solve the so-called "spoiler" problem, instead of attacking the only party that takes climate change seriously.

With Internet attacks swirling that Dr. Stein was "anti-science", CNN asked a series of questions on various science-related issues including vaccines, the FDA, Wi-Fi, and GMOs. To help get the full story out, the Stein campaign published her full, unedited responses to these questions.

7. Vox: Why the media's unfair attacks on Jill Stein need to stop

This piece, originally posted at Vox.com, calls Clinton backers in the media to task for misleading attacks on Jill Stein, making a compelling case that "Stein critics apply a hypocritical and deceptive double standard when calling Stein’s behaviors 'disqualifying.'"

Articles have appeared on various websites of questionable reputation making claims that Jill Stein, Ajamu Baraka and/or the Green Party have endorsed Donald Trump. This is completely false, as fact-checking site Snopes.com has pointed out.

Pundits on Twitter spread false claims that Jill Stein praised Vladimir Putin's human rights record on a trip to Moscow and that she refused to criticize Russian policies. These claims were debunked by The Intercept, yet in an election year tarnished by fact-free, speculative journalism and hysteria over Russia, none of the journalists who Pulitzer Prize-winning journalist Glenn Greenwald implicated in spreading falsehoods have retracted their disproven claims. When two Russian environmentalists were deceived by this smear campaign, the Stein campaign responded to set the record straight.

Blog site Daily Kos published a false claim that Jill Stein and the Greens had endorsed Donald Trump, as well as a personal attack on a young woman of color working for the Stein/Baraka campaign. The campaign responded with a statement denouncing the site's tactics for creating a toxic, deceitful political environment.

11. Jill Stein and the Greens have been active in environmental causes and social movements

Well-funded environmental front groups like League of Conservation Voters and Friends of the Earth US have been spreading misinformation, accusing Jill Stein and the Greens of not being involved in campaigns against the Keystone XL pipeline and fracking, as well as other social movements. These accusations are quite simply false.