A PERSONAL LETTER
FROM CHRIS HEDGES

As a campaign we are not only excited, but honored to have this personal endorsement of Jill and Ajamu from the legendary Chris Hedges.

After reading this, will you give as generously as you can to our campaign? Our donations are down and we urgently need your help! We must defeat the fear-messaging coming from the Clinton campaign. Together we will.

FROM CHRIS HEDGES:
Over the last 15 years, following my return to the United States after two decades as a foreign correspondent, I have written eleven books on American culture and society.

My reporting and writing, which has taken me to many parts of America, has convinced me that the traditional mechanisms of reform, including the two major political parties, have been captured by corporate power. 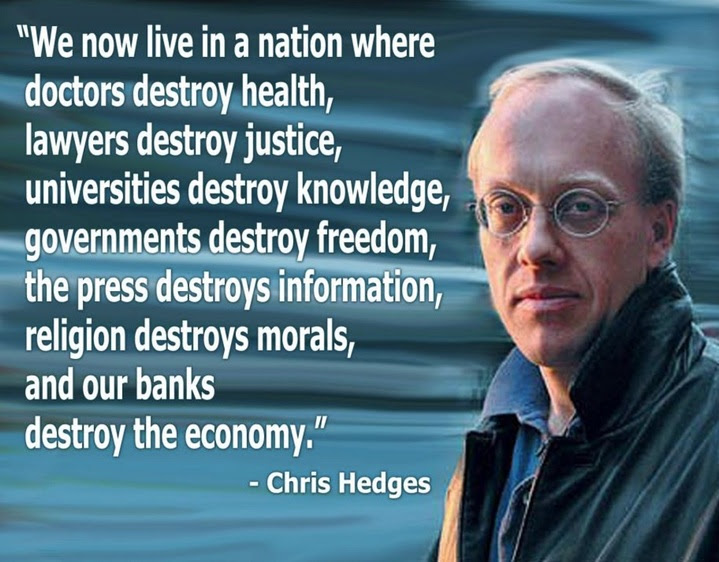 We no longer live in a functioning democracy, but a system the political philosopher Sheldon Wolin calls “inverted totalitarianism.”

We will step outside this system and build alternative movements, including alternative political parties, or see the rise of a Christianized fascism, of which the Trump campaign is the dress rehearsal.

It is imperative that you join me in contributing to the Stein/Baraka presidential campaign and vote for Jill and Ajamu in the upcoming election. There is no longer any genuine threat from Donald Trump that can be used as an excuse to vote for Hillary Clinton.

The current policies of austerity and endless war, of wholesale surveillance, of Wall Street fraud and abuse, along with a refusal to enact a massive green energy program to save our environment, will by 2020 ensure the rise of a far-right candidate endowed with a discipline and political skill that eludes Trump.

If Jill and the Green Party can get 5 percent of the vote we will have $10 million in federal funds in 2020 and broad, nationwide ballot access. This election is about building the momentum for this historical moment.

The time for resistance, genuine resistance, is now. We must step outside the political mainstream. We must, like Greece and Spain, invest in movements and parties to reverse our corporate coup.

We must dismantle the neoliberal policies and imperial adventurism that have laid waste to our civil liberties and are destroying the nation and the planet.

Don’t be ruled by fear this election. Be ruled by your conscience.

John, will you help us today? Time is of the essence - with 2 weeks left in the campaign, it’s urgent now!