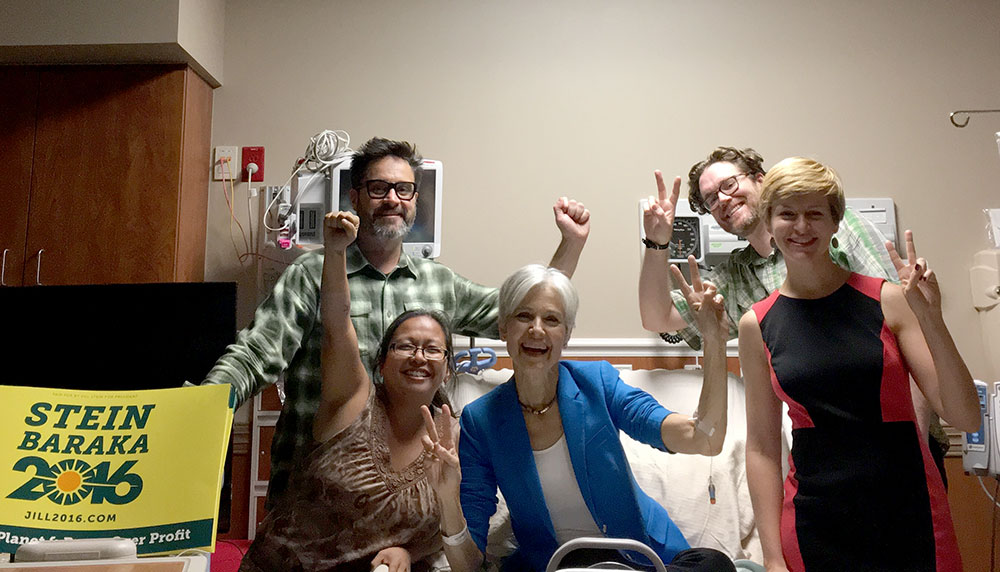 Dr. Stein with her livestream production team at the hospital in Austin, TX.

Despite an illness which prevented her from traveling to Las Vegas for the final presidential debate on Wednesday, October 19th, Green Party presidential nominee Jill Stein livestreamed her responses to the presidential debate questions in real time and held a Facebook Q&A from her hospital room in Austin, Texas, in a two hour-plus Facebook Live session that has reached nearly 3.5 million viewers and rising as her debate commentary went viral on social media.

"Emerging from two days of fabulous hospital care, I feel profoundly fortunate, and am more determined than ever to fight for health care as a human right for all Americans through an improved Medicare for All health insurance program," Dr. Stein said after being discharged from the hospital on Thursday afternoon. "I am also grateful to all who tuned in on Wednesday evening to hear my responses in a debate that was otherwise shamefully lacking in substance and drenched in deception."

Dr. Stein, who has had occasional asthma episodes since childhood, had been in remission from the condition for most of her adult life. She has been on the campaign trail since February 2015, the longest of any presidential candidate, and an asthma flare had recently been triggered during a stay in a hotel room with a poor quality ventilation system.

Earlier this week, Dr. Stein developed a fever in addition to her asthma, and was seen Tuesday afternoon at St. David's South Austin Medical Center, where she was admitted later in the day and diagnosed with pneumonia. She received exemplary care from the hospital staff, and decided to move forward with her scheduled livestream for the debate on Wednesday night.

Campaign staffers in Las Vegas, who had been preparing for the livestream production, flew out to Austin and set up an impromptu studio in her hospital room, where they inserted her debate responses in real time alongside the broadcast of the mainstream debate. After the debate was over, Dr. Stein stayed online to take questions directly from the American people, and was also interviewed on Democracy Now!'s "Expanding the Debate" special.

"What Dr. Stein did on Wednesday, despite her illness, was nothing short of heroic," commented Stein/Baraka campaign manager David Cobb. "Her incredible stamina, and her dedication to giving voice to the needs of the American people and putting forward a vision for a better society in this election, is an inspiration to me, our staff, and our supporters all over the country who are fighting for the greater good."

Dr. Stein noted: "From Donald Trump's psychotic self-promotion to Hillary Clinton's toxic war mongering, so many Americans were physically sickened having to listen to the mud-slinging that the presidential debates have come to symbolize. I share with millions of Americans a deep visceral disgust towards the political wasteland being forced on the nation by a media blackout that silences the alternative politics of integrity that the American people are craving."

"The Stein/Baraka campaign is the antidote to this political sickness being shoved down our throats," she continued. "As Donald Trump continues to implode, and the Republican leadership merges with the Clinton campaign, it is more critical than ever that we must create an alternative political party for everyday, working people, that is not controlled by the bankers and billionaires. Don't throw your vote away on a failed two party system that's throwing you under the bus. Invest your vote in a real movement for change. Vote Green in 2016."

Dr. Stein was discharged from the hospital on Thursday afternoon. Her next scheduled appearance will be on Friday, October 21st, for a town hall hosted by the Young Turks at the YouTube Space in Los Angeles.