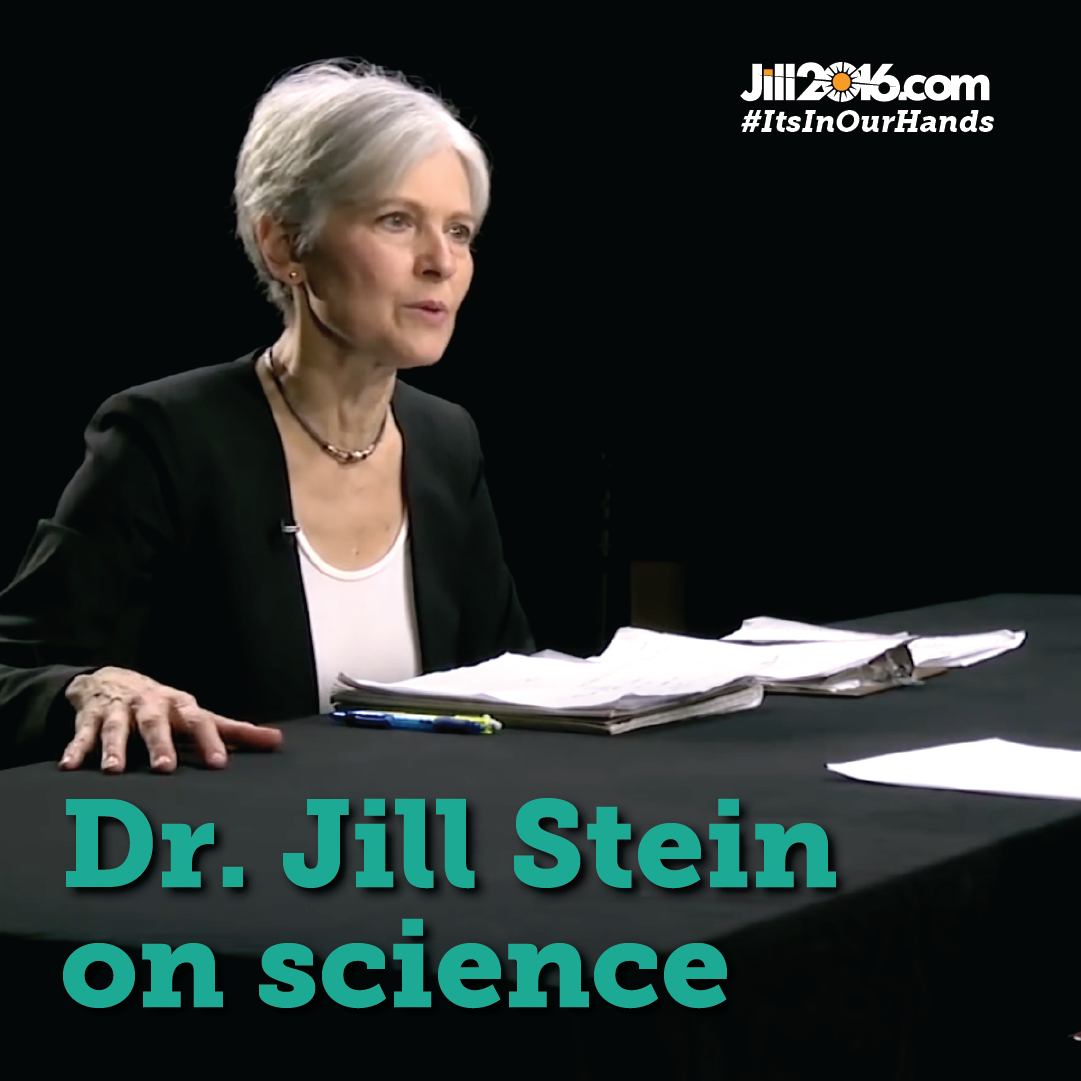 CNN recently sent a series of science-related questions to Jill Stein for a feature story. Here are the questions with Dr. Stein's full, unedited answers, including links to research she cited.

What is Dr. Stein’s explicit position on vaccines and her concern with the FDA and CDC?

Vaccines are a critical part of our public health system. I have always been pro-vaccine, and in fact as the only candidate who supports universal health care as a right, in effect, I am the most pro-vaccine and pro-health candidate in this race. Vaccines prevent serious epidemics that would cause harm to many people and that is why they are a foundation to a strong public health system. Polio is an important example. So is H Flu - a bacteria that caused serious illness, including meningitis, in 20,000 children a year in the US, before development of the H flu vaccine.

As a doctor, I’m concerned that many Americans don’t trust the FDA. Why not? For starters, the current FDA commissioner appointed by President Obama was a highly paid consultant for big pharmaceutical corporations, as Senator Sanders pointed out in opposing his nomination. In the case of Vioxx, the FDA approved a profitable pain reliever that caused up to 140,000 cases of heart disease, and even tried to silence its own scientists who discovered this deadly side effect.

The CDC actually accepts huge amounts of money from big pharmaceutical corporations, as an investigation by the British Medical Journal revealed. So many scientists, doctors and watchdog groups have flagged these clear conflicts of interest in the FDA, CDC and other federal agencies.

As President I would stop the revolving door and clean up these agencies so that the American people can trust that they’re putting people over profits, and science over lobbying interests.

She told the Washington Post “there were real questions” about vaccines and “I don’t know if all of them have been addressed.” What questions were there and what remain?

There were questions about mercury in vaccines that were given to young infants that were addressed because of pressure from parents and physicians working together. There were also concerns about the vaccination schedule that have been addressed as well.

One real question that remains is how much pressure the pharmaceutical industry exerts on bodies like the FDA and CDC to approve medications, including vaccines, in a shorter time schedule, known as ‘fast track,’ than is warranted to determine their safety. An anonymous survey of medical officers at the FDA performed by Public Citizen found that there were concerns that fast track approval lowered drug safety standards.

Dr. Stein has called the notion that she is anti-vaccine the “swift boat” attack of this election. Can she please explain this?

Like the “Swift Boat Veterans for Truth” attacks on John Kerry, the birther claims that Barack Obama wasn’t born in the US, and most recently the DNC’s campaign to paint Bernie Sanders as an atheist, the campaign to trick people into thinking I’m against vaccines was never about the truth. Look at the investigative website snopes.com - they researched this claim and rated it false. But just like the birther conspiracy, there are people who keep repeating a discredited claim because their real agenda is to create confusion and doubt and distract people from important issues like creating an economy that works for all of us.

What actually happened is that a parent raised concerns about the possible health effects of WiFi radiation on developing children, and I agreed that more research is needed. It may surprise many people that over 200 scientific experts in the field have called for more research into the health effects of radiation from devices like cellphones and WiFi, especially on developing children, and a number of countries have banned or restricted these technologies in schools. These concerns were amplified by a recent National Institutes of Health study that provided “some of the strongest evidence to date that such exposure [to the type of radiation emitted from cell phones and wireless devices] is associated with the formation of rare cancers…”

Scientists don’t know for sure if these technologies are safe for children, and as a doctor, I’d rather take precautions until the research is more conclusive. Protecting children’s health and respecting the scientific process is more important to me than giving simple, politically correct answers.

Does a concern about Wi-Fi affect the party’s call for free broadband internet?

No. We believe that access to information is a human right, and that includes access to broadband internet. As I’ve stated, I think we should listen to what scientific experts are saying and take precautions about how much we expose young children to WiFi and cellphones until we know more about the long-term health effects of this type of low-level radiation.

Dr. Stein has called for a moratorium on GMOs and pesticides. How would this work? Does it apply to all GMOs or just some?

Why should there be a moratorium on GMOs? Can the campaign point me to evidence they are harmful?

Respected public-interest scientific organizations reject the claim that GMOs have been proven safe. An editorial in the New England Journal of Medicine entitled “GMOs, herbicides and public health” stated that new developments “suggest that GM foods and the herbicides applied to them may pose hazards to human health that were not examined in previous assessments.”
The Union of Concerned Scientists has raised concerns about the difficulty finding reliable health and safety research on GMOs due to the biotech industry’s efforts to suppress research on its products.
Physicians for Social Responsibility has raised similar concerns: “The FDA doesn't conduct safety testing on GMO crops and doesn’t require independent testing. The only testing done is by the same biotech corporations that develop the crops. Moreover, these corporations severely restrict scientists from conducting independent health or environmental safety research, making it extremely difficult to get unbiased investigation”.

The World Health Organization classifies glyphosate, the herbicide in Roundup, as a probable human carcinogen. Herbicide residues, including glyphosate, are found in treated GMO foods that are sold in grocery stores.

38 countries have banned the cultivation of GMOs, including France, Germany, Italy, Netherlands, Finland, Wales, Switzerland and many more.

Is there a concern about how this would affect the agriculture industry or food access?

We need to transform the food system in the United States so that it is more localized, more sustainable and less harmful to health and the environment. Research shows that stopping the usage of GMO seeds with their associated pesticides, shifting to organic farming, and employing water-conserving irrigation and regenerative methods of farming would protect ecosystems, water supplies and sequester carbon in the soil, which would also help to mitigate the climate crisis. Studies show that we can meet our food needs with organic agriculture.

Is there a concern that criticisms casting Dr. Stein as at odds with science are impacting the campaign?

Clearly there are attempts by our detractors in the political establishment, amplified by some in the media, to discredit our campaign by distorting statements that I’ve made about complex scientific issues. The political establishment clearly feels threatened by the enthusiastic response to our agenda for a Green New Deal to end unemployment, halt climate meltdown, and make wars for oil obsolete. The Green Party platform is actually the most pro-science, pro-research platform of any party, but the research has to be done by independent institutions that don’t have a financial stake in the outcome.