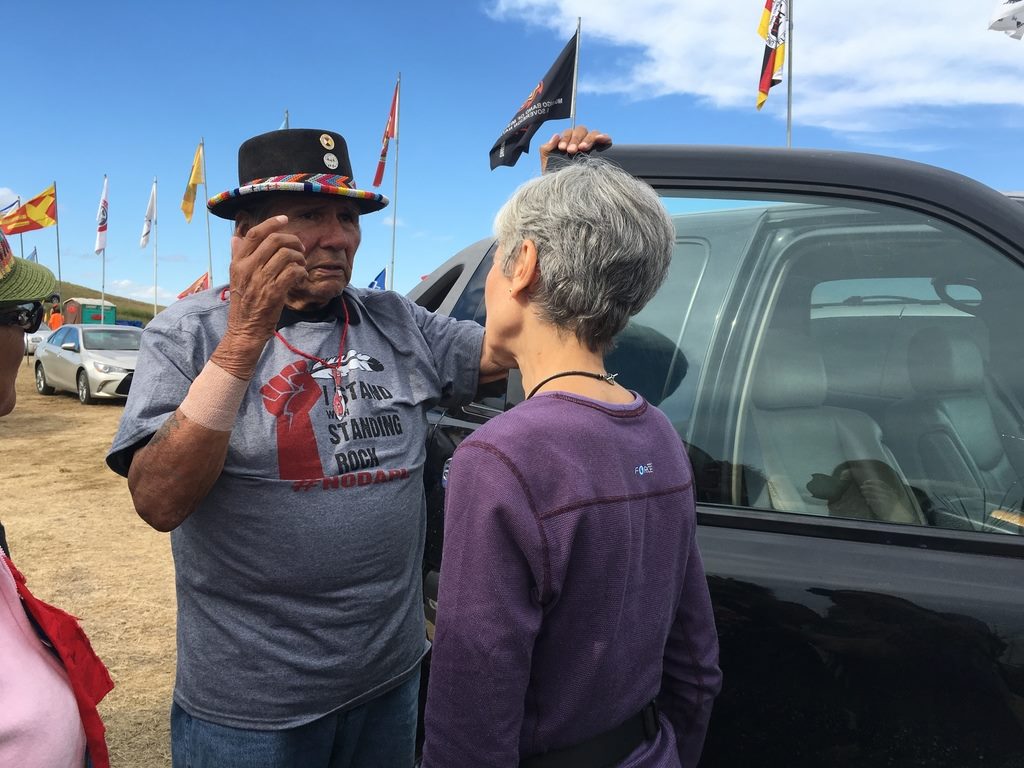 BISMARCK, ND - Jill Stein responded to reports that North Dakota authorities plan to press charges against her for participating in civil disobedience against the Dakota Access Pipeline Tuesday morning. The action was led by Indigenous water defenders who locked down onto construction equipment. Days earlier the same bulldozers were used to assault the ancestral grave sites of the Standing Rock Sioux nation. Pipeline management at that time had unleashed vicious attack dogs on the peaceful protestors and sprayed pepper spray into protesters' faces.

In support of the action that stopped pipeline construction on Tuesday, Stein spray-painted the words "I approve this message" onto the blade of a bulldozer that had been tagged with other messages of protest and that had been used to destroy sacred burial sites of the Standing Rock Sioux.

Stein issued the following statement Wednesday: "I hope the North Dakota authorities press charges against the real vandalism taking place at the Standing Rock Sioux reservation: the bulldozing of sacred burial sites and the unleashing of vicious attack dogs. I hope they take action against the Dakota Access Pipeline company that is endangering drinking water not only for the Standing Rock Sioux, but for millions of people downstream of the reservation who depend on the Missouri River.

"The pipeline will carry up to 570,000 barrels of highly polluting Bakken crude oil per day. This would be another deadly blow to a climate teetering on the brink. It cannot be allowed to go forward.

"Our campaign supports the courageous Indigenous leaders who are taking a stand to protect future generations from the deadly greed of the fossil fuel industry. We approve of their vision and courage. Donald Trump, on the other hand, will support the pillage of the planet as his energy advisor's company intends to run oil through the destructive pipeline; and Hillary Clinton's silence on the Dakota Access Pipeline represents tacit approval of the continued assault on Mother Earth."