An Open Letter from Jill Stein to California Voters

All Hands on Deck! Two Ways To Build The Revolution in the CA Primary 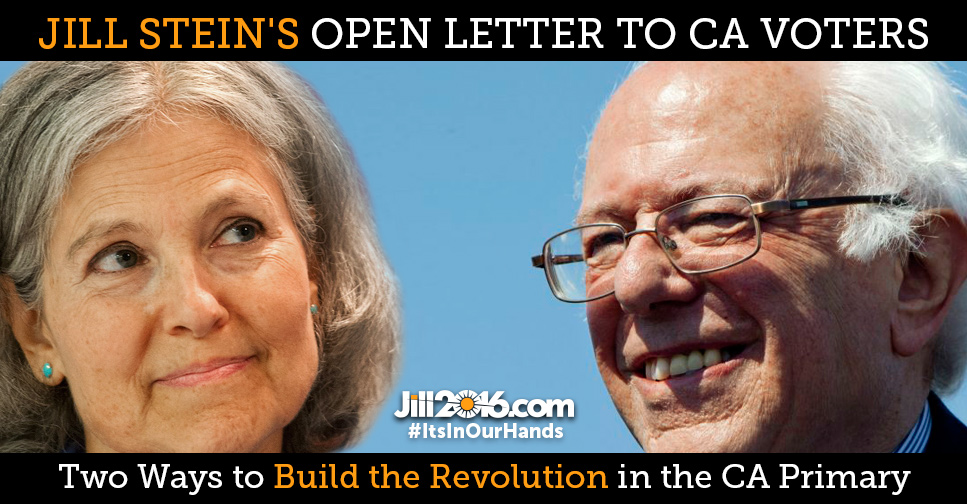 California voters have a chance to put us on the road to revolutionary change in the June 7 primary.

At this historic moment, as voters reject the Clinton and Trump campaigns with record high levels of dislike and mistrust, I ask not just for your vote for me, but also for your vote for Bernie. These votes are powerfully synergistic as we build an historic grassroots movement and a political vehicle to carry it forward.

If you’re a registered Green, I need your vote in the contested Green Party primary, so we can continue to build an enduring political home for revolutionary change. You will be voting for the only national party not poisoned by corporate money, and for the policy solutions we urgently need: an emergency Green New Deal providing 20 million green jobs to transition to 100% renewable energy and avert climate catastrophe, to cancel student debt and make public higher education free, to provide health care and education as basic rights for all, to create a welcoming path to citizenship, end police violence and the war on drugs, and to provide a foreign policy based on international law and human rights.

If you are registered as a Democrat or as “No Party Preference”, please vote for Bernie in the Democratic primary. The Sanders campaign is putting up a valiant fight, despite the shameless assault by the Democratic Party. From super-delegates to election “irregularities”, stifled debates, manipulated conventions, an army of Clinton loyalist insiders, and a corporate media machine - the party has been trying to marginalize the Sanders campaign from the get go. And this isn’t the first time. From redistricting Dennis Kucinich, smearing anti-war candidate Howard Dean with the “Dean scream”, and demonizing Jesse Jackson with a public relations fear campaign, the Party has repeatedly shown why it’s hard to have a revolutionary campaign in a counter-revolutionary party.

Still, the battle is not over. The Democratic nomination is in contention. The more the Sanders team can raise the bar for the people not the billionaires, the stronger we will all be for it.

I urge you to reject the propaganda of powerlessness peddled by the corporate pundits and party operatives of the liberal elite. They tell us all – Berners and Greens alike – we must rally around Hillary Clinton as the lesser evil alternative to Donald Trump.

The pundits should know better. Donald Trump is riding a wave of right-wing extremism produced by the Clintons’ very own neoliberal policies – NAFTA and Wall Street deregulation that crashed the economy and caused so much continuing pain. Five million families were cheated out of their homes, nine million jobs destroyed, and this low wage economy is still on the rocks. Another Clinton in the White House will only create more economic despair fanning the flames of right wing extremism.

And with the Clintons’ record of service to fossil fuel giants and war profiteers, it’s not just the economy that’s at stake here. Sure there are differences between Trump and Clinton, but not enough to save your job, your life, or the planet.

It’s Bernie, not Hillary, who is solidly beating Trump in the polls. And besides, the lesser evil is not a solution to the greater evil – because people stop coming out to vote for what’s throwing them under the bus, as we saw in the 2014 mid term elections. The real solution to Trump is revolutionary progressive policies. And that will only come from the agenda of economic and racial justice shared by Bernie’s and my campaigns.

The establishment insiders tell us to vote against what we fear instead of for what we believe. But this politics of fear has delivered everything we were afraid of. All the reasons we were told to vote for the lesser evil – because you didn’t want massive Wall Street bailouts, the offshoring of our jobs, the meltdown of the climate, the attack on immigrants and our civil liberties, the expanding prison state, endless war – that’s exactly what we’ve gotten because we allowed ourselves to be silenced.

In fact, the problem of vote splitting could be solved with the stroke of a pen with Ranked Choice Voting, which is used in cities around the nation. California and other state legislatures could pass it right now and avoid any “spoiling” of the presidential election. But the machine Democrats have refused to consider such bills because they rely on fear to coerce your vote. That in itself tells you they’re not on your side, and do not deserve your vote.

Don’t doubt for a minute your ability to transform this election. Bernie is proving that the majority of Americans want a progressive campaign independent of the billionaires. If Bernie is denied the nomination, don’t discount the potential for our Green campaign to carry the movement forward to become a major force in the election. Forty-three million people – a winning plurality in this race – are locked in student debt and their only way out is my plan to bail them out, like Obama bailed out Wall Street. If milllennials in debt decide to get the word out, hold on to your hat for a voter revolt that could go a very long way, even perhaps to the White House.

Here’s the bottom line. Democracy doesn’t need silence and fear. It needs voices and values, and a moral compass. We must be that moral compass. The clock is ticking – on the next Wall Street collapse, the climatemelt down, expanding war, the slide towards fascism, nuclear confrontation and more. This is the time to stand up with the courage of our convictions, while we still can.

The corporate candidates will not fix this for us. We are the ones we’ve been waiting for.

Come out on June 7 and vote for me, Jill Stein, if you are registered Green, and for Bernie Sanders if you are Democratic or “no party preference”.

Together we can reject the lesser evil and fight for the greater good – like our lives depend on it, because they do. #ItsInOurHands