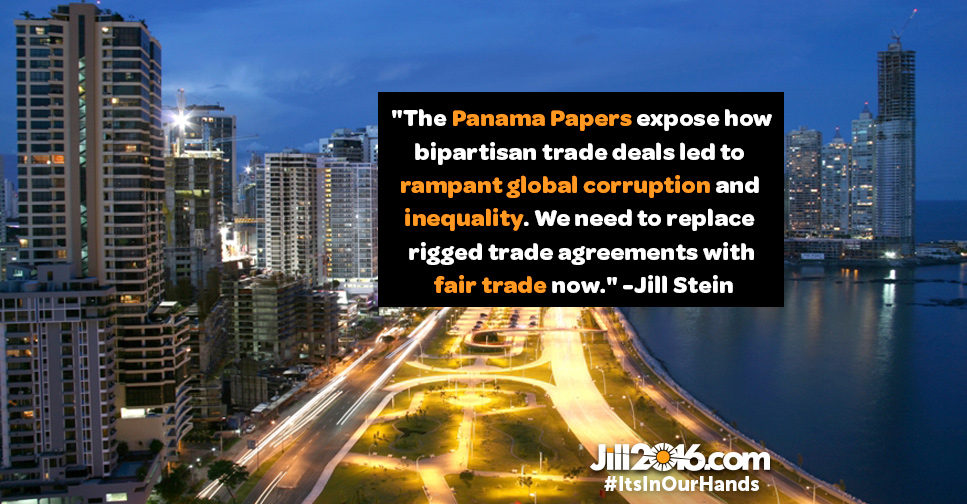 "Free trade" has enriched the global elite while throwing jobs, workers’ rights, and environmental protections under the bus.

The bombshell Panama Papers leak reveals where the global economic and political elite converge in the shadowy world of tax havens. It's a wake-up call that today’s world has become the textbook definition of oligarchy: rule by a few wealthy elites.

And the stage was set for rampant secrecy, corruption and inequality by trade agreements championed by Democrats and Republicans alike. In fact, President Obama pushed through a trade agreement with Panama despite warnings that it was an open invitation to massive tax evasion.

We need to scrap the bipartisan consensus on trade that has enriched the global elite while throwing jobs, workers’ rights, environmental protections and financial regulation under the bus.

Today our world is run by the wealthiest of the wealthy, who buy and market politicians like any other commodity.

One such politician is Bill Clinton, whose enduring political legacy is being the salesman for corporate globalization. Clinton took the selling of our political system to special interests to a whole new level, and in return those special interests have fueled his and Hillary’s fortunes, both political and personal.

One of the major achievements of Bill Clinton’s presidency was pushing through NAFTA with bipartisan support in Congress. President Obama also pushed through additional free trade agreements shortly after taking office, including the deal with Panama.

The Panama Papers leak shows how the global elite and their sponsored politicians have made obscene profits from the predatory enterprises that thrive in the shadows of the globalized economy.

This should be the last straw. We’ve seen enough to know that this global economic order is corrupt, unjust and unsustainable. It needs to be replaced now - starting with trade deals.

Fair trade means trade agreements that are written and approved transparently and democratically, and that strengthen workers’ rights, environmental protections, and financial regulations, rather than weakening them.

Replacing “free trade” with fair trade is a first step to rolling back the power of the oligarchs, which has been rapidly overtaking whatever democracy America had.

The Supreme Court has sanctioned the buying of elections by a handful of rich individuals, while approving the disenfranchisement of tens of millions of Americans from the voting booth.

We know the establishment parties won’t act to help us. After the Republican Party willingly shipped millions of jobs overseas in exchange for campaign cash from trade lobbyists, GOP candidates for President are cynically trying to harness the anger of the working people whose futures they sold. Meanwhile, the Democratic front runner is a paid spokesperson for the global corporate elite.

What’s truly shocking is that so many billionaires lack even the basic decency to pay taxes to their country like the rest of us.

As President, I will ensure that the rich pay their fair share of taxes so that we can provide all Americans with education, jobs, healthcare, and other necessities.

Together we can create an America and a world that works for all of us.