Greetings from the campaign trail, where the peaceful rebellion is growing stronger by the day!

Here's some of the latest exciting news from the last few weeks of my whirlwind cross-country tour.

As you know, our campaign doesn’t take a dime from corporate interests, and never will. That means everything we do, including cross-country trips to galvanize grassroots organizing across America, is made possible thanks to support from people like you.

Can you pitch in today to support our campaign for a world that works for all of us? Remember, your contribution will be matched up to $250 by federal matching funds! 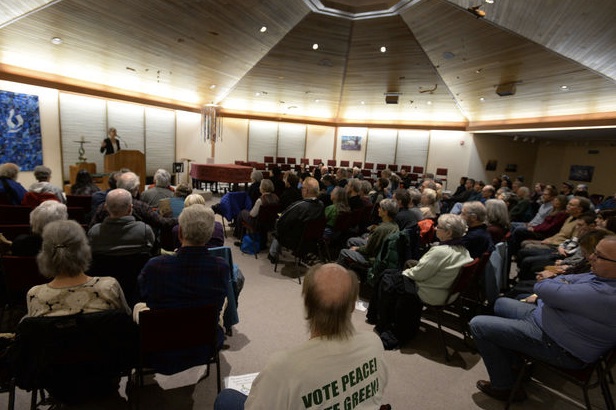 Oregon: I spoke to packed audiences in Portland and Corvallis about my trip to the COP21 climate summit in Paris, where it was clear that not only our climate, but also peace and democracy are under massive assault. When I brought up our holistic solutions to tackle these crises together, the response was tremendous. People were particularly excited about our Peace Offensive to stop ISIS in its tracks - by placing an arms embargo on the Middle East, freezing the bank accounts of countries like Saudi Arabia if they won’t stop funding jihadi groups around the world, and leading diplomatic and humanitarian efforts to reduce conflict and protect human rights throughout the Middle East. 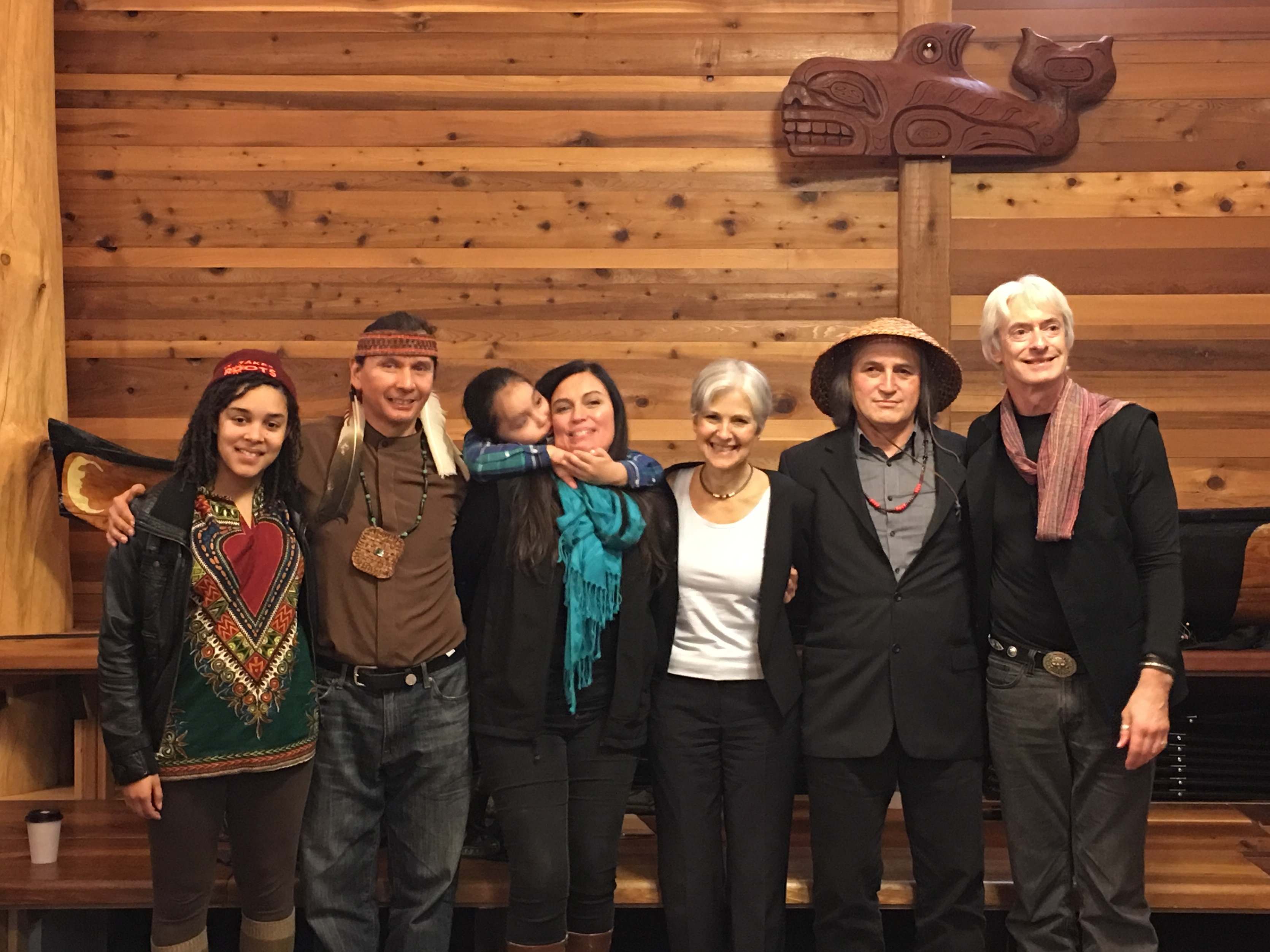 Washington: I took part in a wonderful Green gathering at the Duwamish Longhouse in Seattle, where representatives from Northwest Indigenous tribes presented on local climate solutions. Frontline communities were also front and center in talks from activists representing the Black Lives Matter movement and the Filipino community. Yet another inspiring speaker was Patrick Mazza, one of the defendants in the groundbreaking Delta 5 civil disobedience case, who used the “necessity defense” to clarify that blocking a train carrying Bakken shale oil was justified by the unprecedented and overwhelming danger of the climate crisis. Special thanks to Laurence Brahm for his help convening the gathering, and for sharing his inspired work supporting indigenous cultures and local economies! (In picture above from the left: Sarra Tekola from the Seattle Black Lives Matter and climate movements; Paul Wagner from the Coastal Salish tribe; Deborah Parker and son from the Tulalip tribe; Jill Stein; our host Ken Workman of the Duwamish tribe, the great-great-great-great-grandson of Chief Seattle; Laurence Brahm, community economic development activist)

Los Angeles: I sat down for an interview with Robert Scheer of Truthdig, who has interviewed every president for the past 40 years. Towards the end he told me - on the record - “I’ve spent quite a bit of time interviewing people who became president or who were president... And so, just in this short interview - there's no question in my mind that you're every bit the equal or superior to all of the presidential candidates that I've talked to.” Needless to say, I was honored to get a thumbs-up from Robert Scheer, who hasn’t previously been a fan of independent politics. Yet another sign of the rapidly changing political landscape! 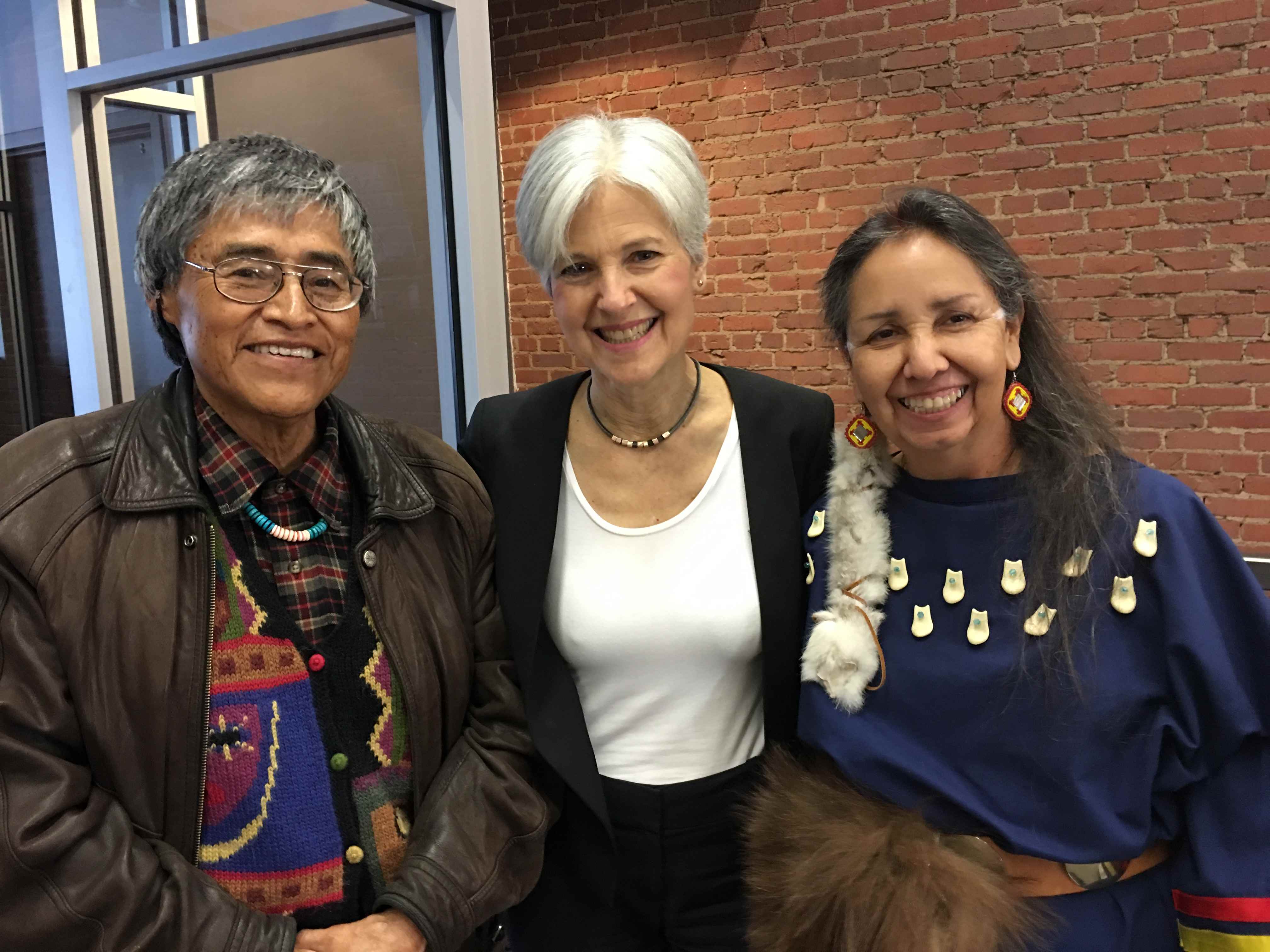 Baltimore: I had the honor of talking with Chris Hedges for his show “Days of Revolt” on teleSUR. In part 1 of the interview, we discussed the dysfunction of American politics, and concluded "the things that are destroying civilization, and the prospects of life on the planet, they’re really shared between those two parties.” And that's why we're building a social movement, and a politics to support it for the long haul. Look for part 2 of the interview soon. At the studio, I was able to catch up with amazing Indigenous activists Petuuche Gilbert and Charmaine White Face, who I first met on a trip to South Dakota to support their campaign to clean up uranium mines that are poisoning Native American land. 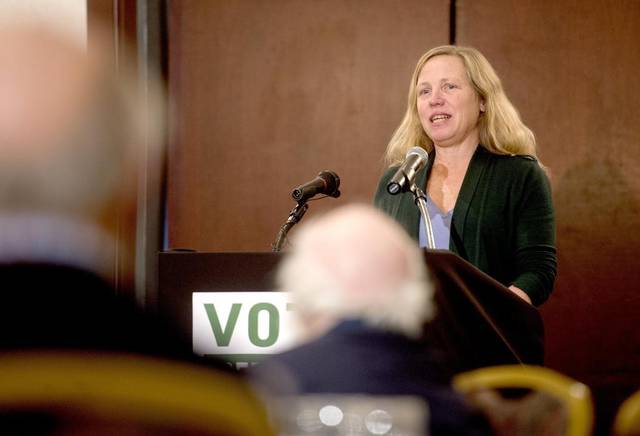 Pennsylvania: I joined the PA Greens for their statewide meeting in State College, where I met up with Cheri Honkala and Dr. Margaret Flowers, the Maryland Greens’ US Senate candidate. In her keynote speech, Margaret emphasized that we’re in an incredibly exciting moment where people are fighting angry and not looking to politics-as-usual to fix things for them - and that Greens should get ready to ride the wave of revolt. A timely message as PA Greens gear up for a major ballot access drive! 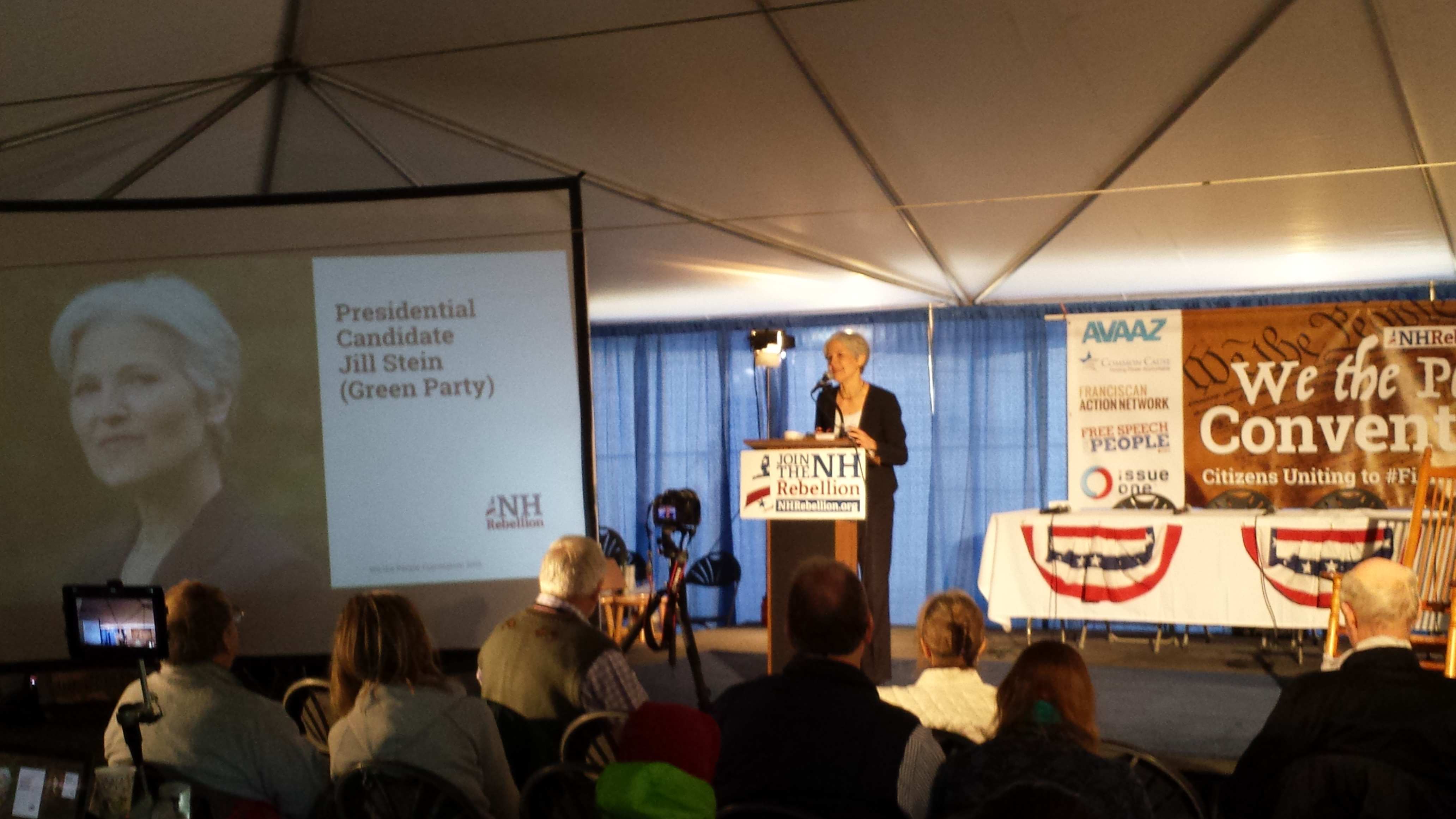 New Hampshire: I was one of only two presidential candidates to show up to the NH Rebellion, a spirited gathering to get big money out of politics. (The other was a Republican who thought big money in politics isn’t a problem). The tent was packed with a wildly enthusiastic crowd, extremely receptive to the message that now is not the time to pledge allegiance to a Democratic Party promoting a military budget that’s bankrupting us, keeping 43 million Americans tied down with student debt, and that just decided behind closed doors to accept lobbyist donations to the DNC. 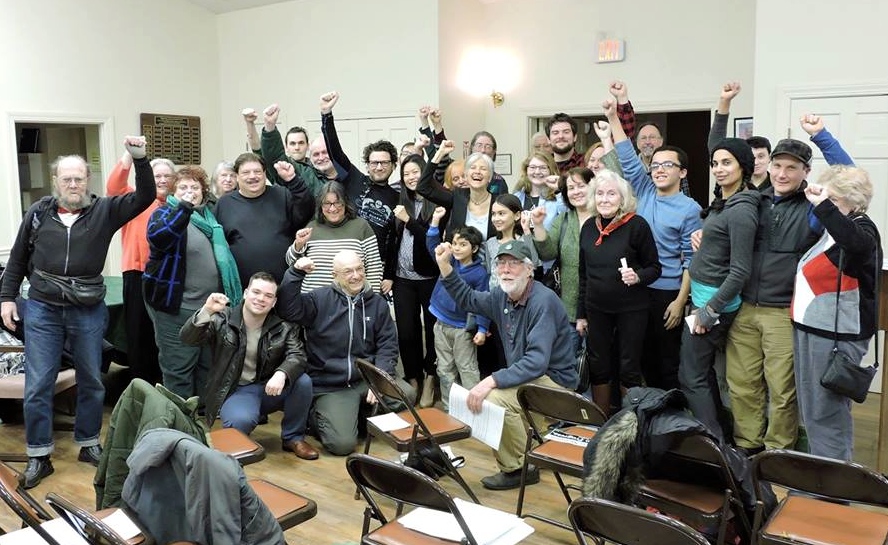 Connecticut: The awesome CT Green Party meeting in Portland was packed with both party stalwarts and young activists. I met a number of candidates and officeholders, including Mirna Martinez, a young Latina mother who serves on the New London Board of Education. The CT Greens are getting fired up for their ballot access drive, and lots of people made pledges to gather signatures. 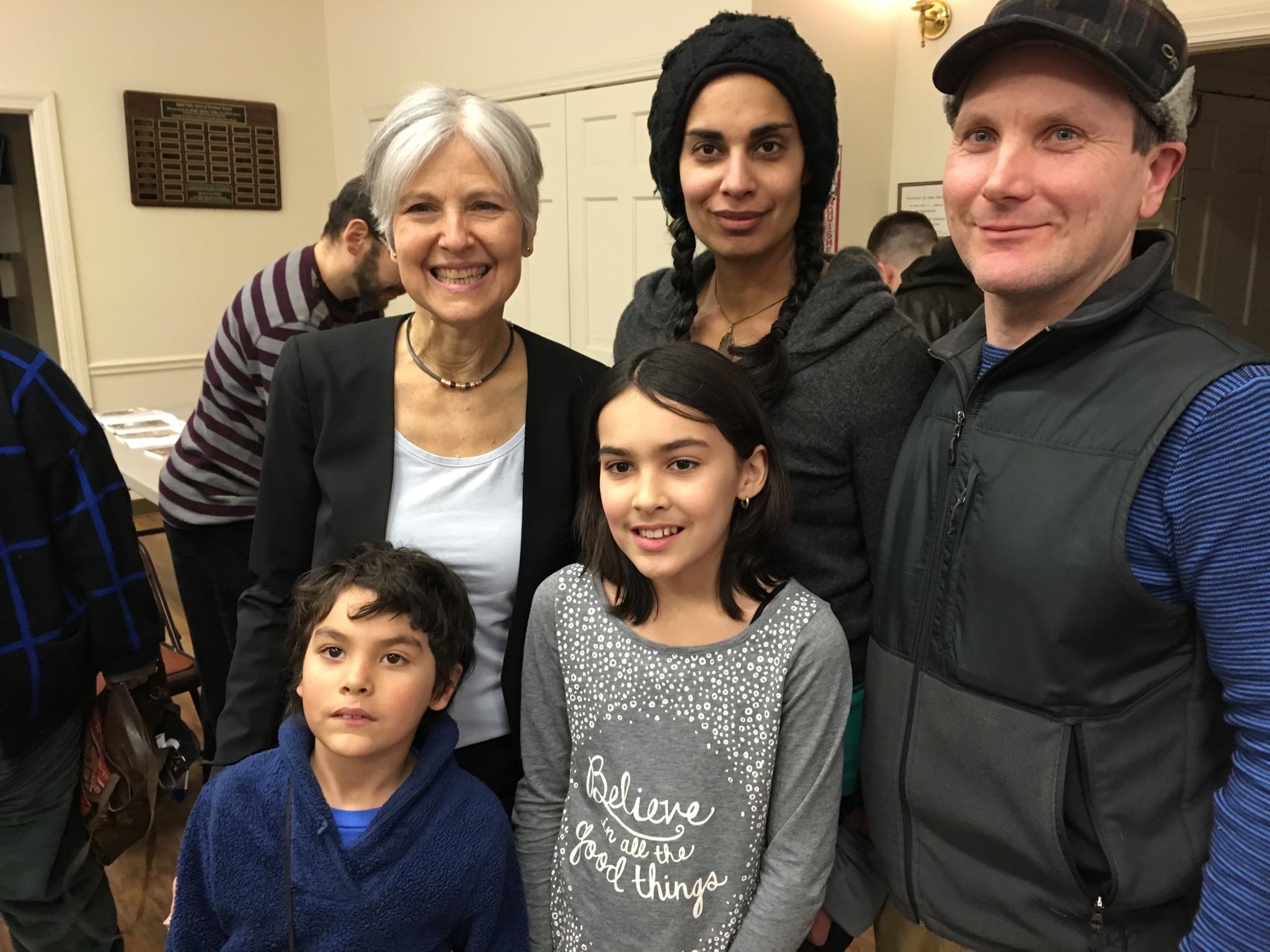 One thing was clear from these inspiring campaign trips: the fight for people, planet and peace over profit is more unstoppable than ever!

Will you contribute today so that I can continue traveling the country fanning the flames of our movement for the greater good? Don’t forget: your contribution will be matched by public funding!

Thank you for all that you do to keep our movement growing.