I was honored to learn that Chris Hedges, Pulitzer Prize-winning journalist and fearless truth-teller, has published an article supporting my run for President. 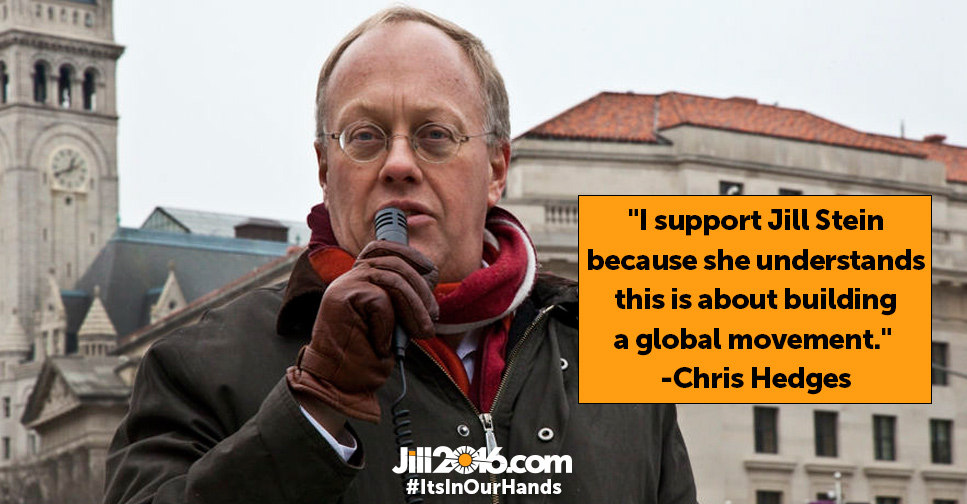 This glowing endorsement from one of the leading political and social thinkers of our time comes at a moment when our campaign is building momentum daily.

Just in the last few weeks, we’ve qualified for federal matching funds earlier than any Green presidential campaign in history, and started our ballot access drive strong in states across the country. And now we’re preparing to essentially double the size of our campaign team, which will take our organizing power to a whole new level.

Will you help us keep the momentum going by contributing as much as you can today? Remember, your contribution will be matched up to the first $250 by federal matching funds!

Every dollar you give will be doubled and put immediately to work building the global movement of movements for people, planet and peace over profit that we need so desperately in this historical moment.

Thank you for all that you do. It’s in our hands!

The political crisis in America is severe. The old ideas that buttressed the ruling class and promised democracy, growth and prosperity—neoliberalism, austerity, globalization, endless war, a dependence on fossil fuel and unregulated capitalism—have been exposed as fictions used by the corporate elite to impoverish and enslave the country and enrich and empower themselves. Sixty-two billionaires have as much wealth as half the world’s population, 3.5 billion people. This fact alone is revolutionary tinder.

We are entering a dangerous moment when few people, no matter what their political orientation, trust the power elite or the ruling neoliberal ideology. The rise of right-wing populism, with dark undertones of fascism, looks set in the next presidential election—as it does in parts of Europe—to pit itself against the dying gasps of the corporate establishment.

We are caught between the jaws of the monsters Charybdis and Scylla, and our escape route is narrow and diminishing. Playing the old political game, attempting reform using the old rules, won’t work. We must focus exclusively on revolt, on overthrowing corporate power to reclaim our liberty and save the planet from a coup de grâce delivered by the fossil fuel industry.

If we fail to revolt we will see the numerous mechanisms for control enshrined in our system of inverted totalitarianism—wholesale surveillance, militarized police empowered to use lethal force against unarmed citizens, the loss of nearly all civil liberties, the impoverishment of the majority of the citizenry in the name of austerity, the use of the military as a domestic police force, indefinite detention without trial, government-ordered assassination of American citizens—spread like a wildfire across the landscape.

The battle before us is global. It is a battle being fought on myriad fronts, including in Greece, Egypt, Spain and Venezuela. The ravages of climate change, the ruthless exploitation of international finance and the evil of American imperialism and militarism are as present outside our borders as they are at home. The greatest enemy before us is not radical jihadists, but the forces lurking within our society that threaten to extinguish human liberty and eventually the human species itself.

Our real compatriots do not look like us. They speak in foreign tongues. They come from different cultures and faiths. They fight on the streets of Athens and Madrid and in Tahrir Square. It is only when we link arms, when we make common cause against the hydra-headed monster of global corporatism and American imperialism, that we will have any hope of victory.

Revolutions come in waves. They ripple around the globe feeding off each other’s ideas, passion and energy. The French Revolution in 1789 and the Haitian Revolution in 1804—the only successful slave revolt in human history—were direct products of the ideas and experience of the American Revolution. The revolutions of 1848 reshaped Europe. The 1917 Russian Revolution inspired numerous revolts including the 1919 Spartacist uprising in Germany. Eastern Europe was remade in the revolutions of 1989. We will create a new worldwide wave, we will rise up en masse, or we will be crushed.

The imperative of revolt dramatically reduces the importance of elections. Elections, managed by the elites, mean nothing if radical movements are not powerful enough to disrupt and dismantle corporate power. To deserve our support, a political candidate or party must hold fast to the goals of a fiercely anti-capitalist, anti-militarist movement. Those running for office must serve as the political expression of such a movement, for without movements committed to radical politics and buttressed by sustained acts of civil disobedience—strikes, lockdowns, mass rallies, marches, oil and gas pipeline blockages and coordinated disruptions of the systems of corporate power and the war industry—we will lose.

The focus of our energy must be on building nonviolent, mass movements keyed to issues such as immigrant rights; Black Lives Matter; fighting male violence against women, including pornography and prostitution; the anti-fracking and environmental justice movement, which has spawned groups such as the Delta 5; the cancellation of all student debt; the demand for a living wage; the destruction of the animal agriculture industry through the practice of veganism; health care as a human right; the struggle to dismantle the security and surveillance state and expose the crimes of empire; the abolition of trade agreements such as NAFTA and the Trans-Pacific Partnership; and the rebuilding of militant unions. These movements must build alliances with the oppressed around the earth, including the Palestinians. We do not have the luxury, or the right, to pick and choose whom among oppressed people it is politically convenient to support. We will rise or fall together.

This is why I support Dr. Jill Stein, who is running to be the Green Party candidate for president after having won her party’s nomination in 2012. I support Stein because she understands that this is primarily about building a global movement, not about participating in an election. She, unlike Bernie Sanders, knows that this movement will never be realized within the Democratic Party or by paying deference to the power elites, the Israel lobby or the arms industry and the military establishment. She grasps that until we name and destroy the evil of militarism and imperialism, genuine social and political reform, indeed democracy, is impossible. She does not want to work within the corporate establishment. She wants to dismantle it. And all the pundits who tell us not to waste our vote miss the point. It is time to stop playing the game.

“We’re in this kind of magical moment, it’s an existential moment which is very personal and very real,” Stein said when I interviewed her in Baltimore for my podcast, “Days of Revolt.” “It has enormous potential for transformation. The question is which way is it going to go. How are we going to make that happen? How do we optimize what history is going to do? Because history will mobilize people as the treachery of the system continues to be inflicted on us. And the question is whether we will mobilize in time to change it.

“The powers that be would love our movements to remain divided and conquered,” she said. “The challenge of our era is to bring our movements together so we’re working with a common agenda and to some extent a common strategy. That’s what political parties can do. A political party can help provide that conversation so that the movements can [articulate] and develop our agenda, our priorities.

“It is extremely corrupt,” Stein said of the American political system. “It serves the interests of oligarchy. It puts people, planet and peace—it subjugates those critical things—to profit. We have a political system that is funded and therefore accountable to predatory banks and fossil fuel giants and war profiteers. Those are the interests it serves. Those are the policies it creates. It’s sort of like an amoeba that oozes its way into all aspects of the system.

“It’s reached a level where no one except the 1 percent, or perhaps the 5 percent, is out of danger,” she said. “We’re imperiled in a very clear and direct way—whether you’re talking about an entire generation of young people who are locked into debt for the foreseeable future, the decline of wages, the true joblessness that actually exists, the foreign policy of total economic and military domination that’s blowing back at us now catastrophically or the immigrant human rights disaster, as 60 million people were forced to migrate over the past year alone. And the climate is in meltdown.”

She called the presidential debates and political carnival around them “elaborate, staged events to create the sense that resistance is futile.”

“We’re fed this corporate brainwashing, many times a day, that we are powerless,” she said. “And therefore we have to choose between two oppressors. It’s really important to reject that lesser-evilism and stand up and fight for the greater good. The greater good here has been lost in the battle between the evils.

“The politics of fear has delivered everything we were afraid of,” she went on.

She, as has Ralph Nader, pointed out that all the reasons liberals and progressives are told they should vote for a Democratic candidate—Bill Clinton, Al Gore, John Kerry, Barack Obama and now Hillary Clinton—are wrong. These Democratic politicians have never worked to halt the expanding wars, end the assault on civil liberties, curb the looming ecocide, halt the offshoring of jobs or stop the bailouts to Wall Street—$800 billion under President George W. Bush and $16 trillion under Obama. The corporate state, with the complicity of the Republican and Democratic party leaderships, continues to ravage the planet and disembowel the country.

“We have to understand how absolutely deadly the threat is that we are facing now,” Stein said, “whether it’s the next economic collapse, which we are teetering on the brink of right now, or whether it is the meltdown of our climate. We are looking at the collapse of our major ice sheets within the next couple of decades. Within a handful of decades we could basically ruin all coastal cities. When Pearl Harbor was bombed we called out a national emergency, and within six months we had converted 25 percent of GDP to a wartime footing and stayed there. We are facing an all-out climate emergency. It got much worse under the Democrats. Obama [and the Democratic Party] had two houses of Congress. People should not make excuses for Obama—’it was the bad Republicans.’ This is the second point about the politics of fear. The lesser evil paves the way to the greater evil. It’s not in opposition to it. It makes way for it.

“Democracy needs values,” she said. “Democracy does not exist in a vacuum. There’s nothing more powerful than a moral compass. We have to bring that moral compass to our democracy, because it is a ship lost in a storm right now.”

Chris Hedges, whose column is published weekly on Truthdig, has written 11 books, including the New York Times best seller “Days of Destruction, Days of Revolt” (2012), which he co-authored with the cartoonist Joe Sacco. Hedges previously spent nearly two decades as a foreign correspondent in Central America, the Middle East, Africa and the Balkans. Hedges was part of the team of reporters at The New York Times awarded a Pulitzer Prize in 2002 for the paper’s coverage of global terrorism. He also received the Amnesty International Global Award for Human Rights Journalism in 2002.