The Problem with the U.S. Voting System

We don't have a "two-party system" so much as we have an electoral system which favors two center-right political parties. And those two parties have done everything in their power to maintain their power and eliminate, ridicule and harass the competition.

There is a solution to what some call the 'spoiler' problem, which is really a much deeper problem of widespread voter anger at and alienation from our electoral system.

That solution is called Ranked-Choice Voting (RCV), also known as Instant-Runoff Voting (IRV).
Ranked-Choice Voting eliminates the perceived "spoiler" problem and ensures that the winner of an election has the support of a majority of voters. RCV is easy as 1, 2, 3.

1. Voters rank candidates in their order of preference (1st, 2nd, 3rd and so on). If a candidate has more than 50% of the first choice votes, s/he wins.

2. If no candidate gets a majority of the #1 votes, then the candidate with the fewest first choices is eliminated.

3. The voters who selected the eliminated candidate as their first choice will then have their votes added to the totals of their second choice.

4. This process continues until a candidate has more than half of the active votes or only two candidates remain.

Under this system, potential voters are empowered and encouraged to come to the polls because there will be more choices of candidates and the individual voter's ballot will have more impact.

Still not sure about how Ranked-Choice Voting works? Watch this video.

Try it out for yourself!

Here's what it would be like to vote in the 2016 Presidential election with ranked choice voting. 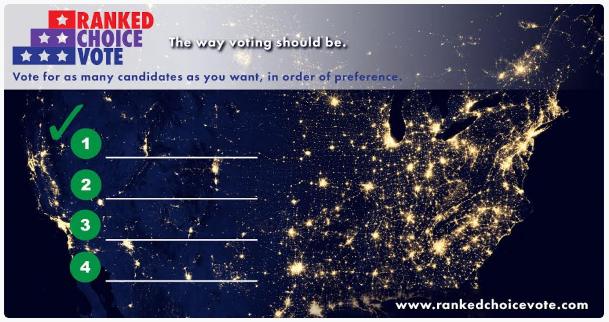 We also encouraged our supporters to practice Ranked-Choice Voting by casting a ballot in the following polls:

The Two Major Parties Have Chosen Not to Act

Leading Democrats and Republicans have known about (and supported) these reforms for years. Fourteen years ago, as an Illinois State Senator, Barack Obama introduced SB 1789 during the 2002 session. SB 1789 would have adopted instant runoff voting (IRV) for congressional and state primary elections in Illinois and authorized IRV for local elections. U.S. Senator John McCain endorsed instant runoff voting back in 2002 as well. Howard Dean also supports Ranked Choice Voting. In fact, he recently published an OpEd in the New York Times in support of Question Five in Maine (statewide referendum on ranked choice voting -- see next section for more details).

RCV has been adopted and proved successful in several local jurisdictions, such as San Francisco, Oakland, Portland (Maine), Minneapolis and many more. We know the solution -- what we lack is the political will from elected leadership to act. But perhaps the establishment parties refuse to change a system they know how to work to their advantage?

Check out Jill Stein’s recent op-ed in the Chicago Tribune about the huge barriers to political competition in America. She highlights Ranked Choice Voting as a promising solution.

This year, Maine has a statewide referendum on ranked choice voting (RCV). Portland, Maine has successfully used RCV for Mayor over the last two election cycles. Our opinion:

Voters across America are frustrated by our broken voting system. The problem is that our current voting system is forcing some people to feel they must vote against the candidate they dislike the most rather than for the one they like the most. Ranked choice voting is a solution to this problem, and Maine is leading the charge to give voters more choices in our elections.

Question 5 gives Mainers the power to rank candidates in the order you prefer. It’s as simple as 1-2-3. Counting the votes is equally easy. If any candidate receives a majority of the most votes, they win. Majority rule. But if there is no majority winner, then the candidate with the least number of first preference votes is eliminated. But those voters did not “waste” their votes, because they already indicated their second choice. That’s why it is sometimes called “Instant Runoff Voting.”

Question 5 has broad support from Independents, Democrats, Republicans, Libertarians and Greens who agree that we need to fix our voting system and allow for real competition and real choice. Ranked choice voting would be used in elections for US Senate, Congress, Governor, State Senate, and State Representative.This system has been successfully used in cities across America including San Francisco, Minneapolis and St. Paul, as well as Portland, Maine.

It’s also used by the Academy Awards, to select the Heisman winner in college football, and Most Valuable Player in baseball, and Robert’s Rules of Order. The Utah Republican Party uses it for internal An added bonus-- this new system has been proven to encourage more civil debate and less mud-slinging during campaigns. Why? Because candidates are eager to earn second-preference votes. Maine is poised to become the first state to implement this improved voting system.

Ranked choice voting is a simple, common sense reform to improve elections. The old “first past the post, winner take all” system is obsolete and falling out of use across the democratic world. It’s time to implement this new and improved system to encourage more participation and more voices. Maine, it’s in your hands.