The devastating rains and floods continue to haunt Louisiana.

Jill Stein arrived in Baton Rouge on Sunday to aid relief efforts for residents affected by the record-breaking flash floods that have hit the region in the last several days. The floods are said to be the worst natural disaster to hit the United States since superstorm Sandy.

Upon arrival she met with Louisiana Green Party officials to get an update on the situation, and to discuss how the national campaign can assist with mobilizing more resources to support relief efforts. 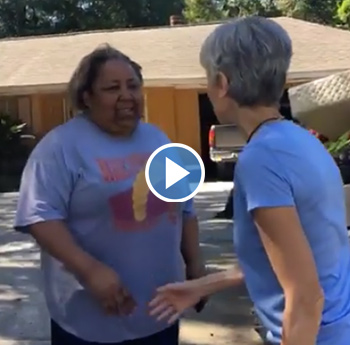 On Monday Stein and several Louisiana Green Party volunteers pitched in to gut houses and prevent water damage in Denham Springs, one of the worst-hit areas and a poor community where residents, many of them people of color, have yet to see attention from media or aid from the government.

In a statement issued last week, the Louisiana Green Party spoke of their support for the following grassroots groups "in their efforts to provide emergency aid to flood victims."

The statement continued “As Greens, we see the Louisiana flood as further evidence of the global crisis posed by climate change. The flood comes on the heels of the hottest month ever recorded and is the eighth "500 year" rain event in the U.S this year. Until humans make global, sweeping changes to our economic and social systems, we must expect these types of disasters to continue regularly. The Green Party of Louisiana calls for the rapid elimination of the fossil fuel economy.

"Furthermore, we recognize what was so apparent during the aftermath of Hurricane Katrina -- the unjust reality that those most greatly affected by these disasters are too often the poor and peoples of color. The floods have displaced people of different races, ethnicities, and economic status.”

On Sunday, Green Party VP Candidate Ajamu Baraka released a statement on the floods. In it, Baraka stated “In the last week at least 40,000 homes have been ruined and 30,000 people or more have been rescued, but there is no temporary housing plan in effect; there is no count of how many people are still missing; more than 40,000 people have already applied for federal assistance and few have updates on the status of their homes and those of their families. Much of Louisiana is in disarray, yet the lessons that we should have learned from Katrina seem to have been forgotten.”

Dr. Stein will discuss her experiences Tuesday morning at a press conference in Washington DC, highlighting the need for emergency action on climate change.