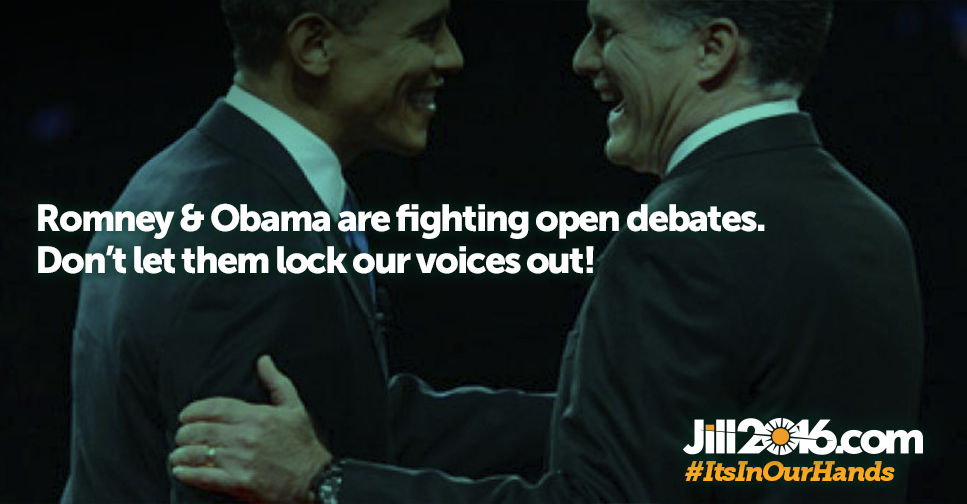 I recently found out that lawyers for Mitt Romney are trying to get our lawsuit against the Commission on Presidential Debates (CPD) thrown out.

Our lawsuit, supported by both Greens and Libertarians, makes the case that the CPD violates antitrust law by excluding independent candidates, essentially giving the establishment parties a monopoly on the presidential debates.

President Obama is also fighting our case for open debates, along with the Democratic and Republican National Committees.

Unlike Romney, Obama, the DNC and the RNC, I believe that debates are for the people, not the parties, and that open debates are essential if we are ever to have real democracy in our country.

After you sign our petition, will you share it with friends and family to help me get the word out about this outrageous attempt to stifle democracy?

When I heard that Mitt Romney was opposing our case for open debates, my first thought was that Romney probably still remembers the time in 2002 when I debated him and two other candidates in the race for governor of Massachusetts.

In that televised debate, I spoke out for our Green platform and values, and then was mobbed by reporters telling me that I won the instant online viewer poll! I wasn’t invited to any more debates with Romney and company after that.

In fact, when I tried to enter the CPD’s presidential debate at Hofstra University in 2012 with my running mate Cheri Honkala, we were arrested and held incommunicado for 8 hours in an undisclosed location, where we were handcuffed to metal chairs.

My experience being literally locked out of debates has only strengthened my belief that Americans don’t just have a right to vote, we have a right to know who we can vote for. Voters deserve to be informed about any candidate who appears on enough ballots to be able to win the presidency.

Please sign and share my petition to tell Romney, Obama, the DNC and the RNC to stop fighting against our right to hear more voices in the debates.

When the Democratic and Republican National Committees formed the CPD in 1989 to take over the presidential debates from the League of Women Voters, the League withdrew its sponsorship, stating that the CPD’s version of debates would be “campaign-trail charades” that would “perpetrate a fraud on the American voter”. They were right.

Considering that 50% of Americans don’t identify as either Democrat or Republican, and 58% say that we need a new major party, it’s even more outrageous that the establishment parties continue using the CPD to completely shut out other voices.

Opening the debates is maybe the single greatest step we can make to take back the political power that the two corporate parties have stolen from the voters. If I’m on stage at those debates, I will tell the American people that they don’t have to vote for political parties controlled by predatory banks, fossil fuel giants, and war profiteers.

We can have an America, and a world, that works for all of us.

Will you help me to build the demand for open debates by signing and sharing our petition right now?