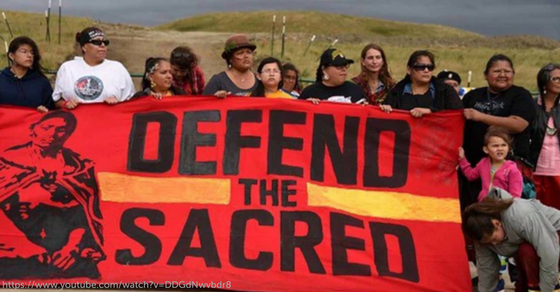 The Stein/Baraka campaign is horrified and outraged at the militarized repression of water protectors at the Standing Rock reservation in North Dakota. Police and private security forces have engaged in violent actions against peaceful earth defenders who have come to protect the land and water from the construction of the Dakota Access Pipeline.

We condemn the violent repression of the peaceful protests against DAPL as human rights abuses, including the use of attack dogs and pepper spray against peaceful demonstrators, the persecution of journalists, the authorization of weaponized drones, the disruption of prayer ceremonies, and the desecration of sacred burial sites. These are not the actions of public servants sworn to protect and serve the community, but the unconscionable oppression of an occupying army against the original inhabitants of this land.

The water protectors have invoked their rights under the 1851 Treaty of Fort Laramie, which grants the Sioux Nation sovereignty over the territory. A Stein/Baraka administration would honor the Sioux claims under this treaty, as well as the right to free, informed, and prior consent under the UN Declaration on the Rights of Indigenous Peoples. We call for an immediate halt to the construction of the pipeline and all attempts on the part of the police to remove the water protectors.

We express our outrage and shame at the silence of the Obama administration and the other presidential candidates in regards to this human rights crisis. We stand with the 14-year-old girl who traveled to the Clinton campaign headquarters from Standing Rock today to deliver a letter appealing to Hillary Clinton for support. She was turned away at the door and the letter was not even accepted for review.

The Dakota Access Pipeline is not only a human rights crisis for indigenous peoples, but a catastrophic ecological crisis that will affect millions of people who depend on the Missouri River for drinking water. There have been over 3,000 pipeline accidents in the United States since 2010, including deadly explosions and spills that have contaminated whole ecosystems. In the past week alone, two pipelines have burst, including a massive incident on the Sunoco pipeline in Pennsylvania which dumped 55,000 gallons of gasoline into the Susquehanna River. There is zero expectation that the Dakota Access pipeline will be free of such problems, and could be even worse as it is intended to carry Bakken shale oil, one of the dirtiest and most volatile types of fossil fuel on the planet.

For hundreds of years, the U.S. government has stolen land from and brutalized indigenous peoples across this continent, prioritizing resource extraction for private profit over the public interest. The menacing presence of extractive industries throughout indigenous territories threatens everyone’s survival. We cannot afford to continue putting corporate profits over people and the planet. Our campaign is committed to establishing meaningful, respectful dialogue with indigenous peoples and ensuring that U.S. policies do not interfere with their rights to life, dignity, and autonomy. We call for an end to these deadly practices, starting with an immediate halt to the Dakota Access Pipeline. We must end all new pipeline construction and eliminate fossil fuel dependency through a transition to 100% clean energy by 2030.

We must also honor the historic role that indigenous people have always played - and must continue to play - in protecting Mother Earth and the ecosystems our lives depend on. As our survival hangs in the balance from drought, pollution, climate change, and mass extinctions, it is more critical than ever to respect the rights and sovereignty of our indigenous brothers and sisters - who are protectors for us all.