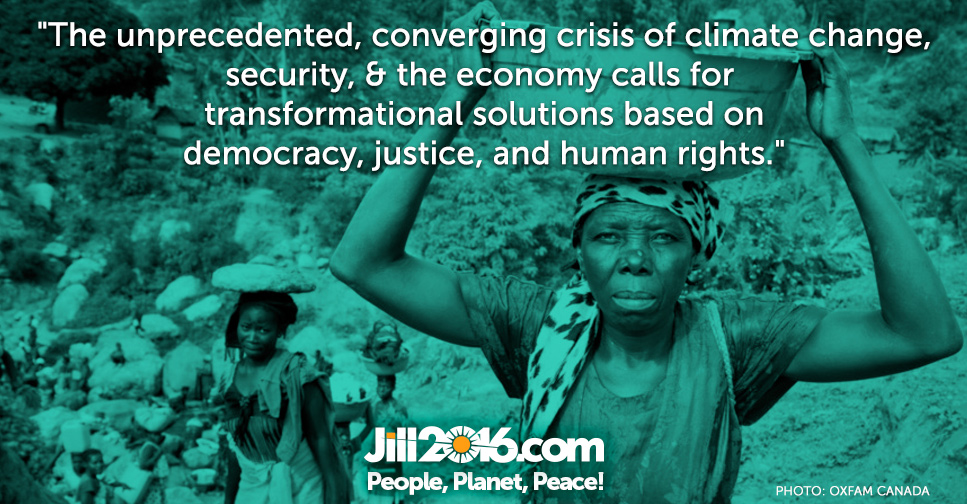 (PARIS) In Paris for the United Nations climate conference, Green Party presidential candidate Jill Stein spoke at a forum on "Women Facing Climate Change". Stein was invited to speak by the Women's International League for Peace and Freedom, organizers of the forum.

Here are her remarks:

Thank you for being here today at this conference on climate and militarism, and for leading the charge for a world that works for all of us.

This is an historic moment, as global crises of climate, security, the economy, and democracy converge in Paris.

In that regard, I want to convey my sincere condolences at the terrible murders of so many innocent civilians in Paris on November 13. The assault in Paris has now been compounded by the brutal shootings in San Bernadino just as the COP convened. Thus the struggle against climate change in Paris is now embedded in a landscape of terrorism.

Regrettably, this has been used as an excuse to silence civil society in a crackdown on gatherings and free speech in Paris. Consequently the corporate climate message is being heard loud and clear within COP21, promoting woefully inadequate voluntary pledges and false market-based solutions.

Our struggle for climate sanity is further linked to the fight against corporate-biased trade agreements, which will allow corporations to undo any climate progress being made.

This all makes the point that these struggles are intensely interrelated. We cannot solve any one of them without solving them all. This unprecedented, converging crisis calls for transformational solutions, based on democracy, justice and human rights.

As the crises are interconnected, so too the solutions are interconnected. I want to mention a couple, including some that are often left out of the discussion.
• Stop corporate trade agreements that drive environmental destruction.
• Launch a Green New Deal to transform our economy. In the United States this would mean 20 million jobs to create 100% clean renewable energy by 2030, revive our economy, turn the tide on climate change, and make wars for oil obsolete.
• A weapons embargo, beginning by halting US-Saudi arms deals ($100 billion in the past 5 years)
• Demand disclosure from national security agencies: who is really funding and arming terrorists? Release the redacted 28 pages of the 9/11 report so we can know who is behind the growth of extremist groups.
• Close Turkey’s border to terrorist militias. Turkey has already closed it's border to refugees. How about closing it to terrorists?

Ultimately this is a political fight. It is critical that we stand up and stand together across issues, and across borders, to be a unified political force for people planet and peace over profit. The minute we stand up, we are unstoppable. It's time to forget the lesser evil and fight for the greater good. The clock is ticking. It’s in our hands.