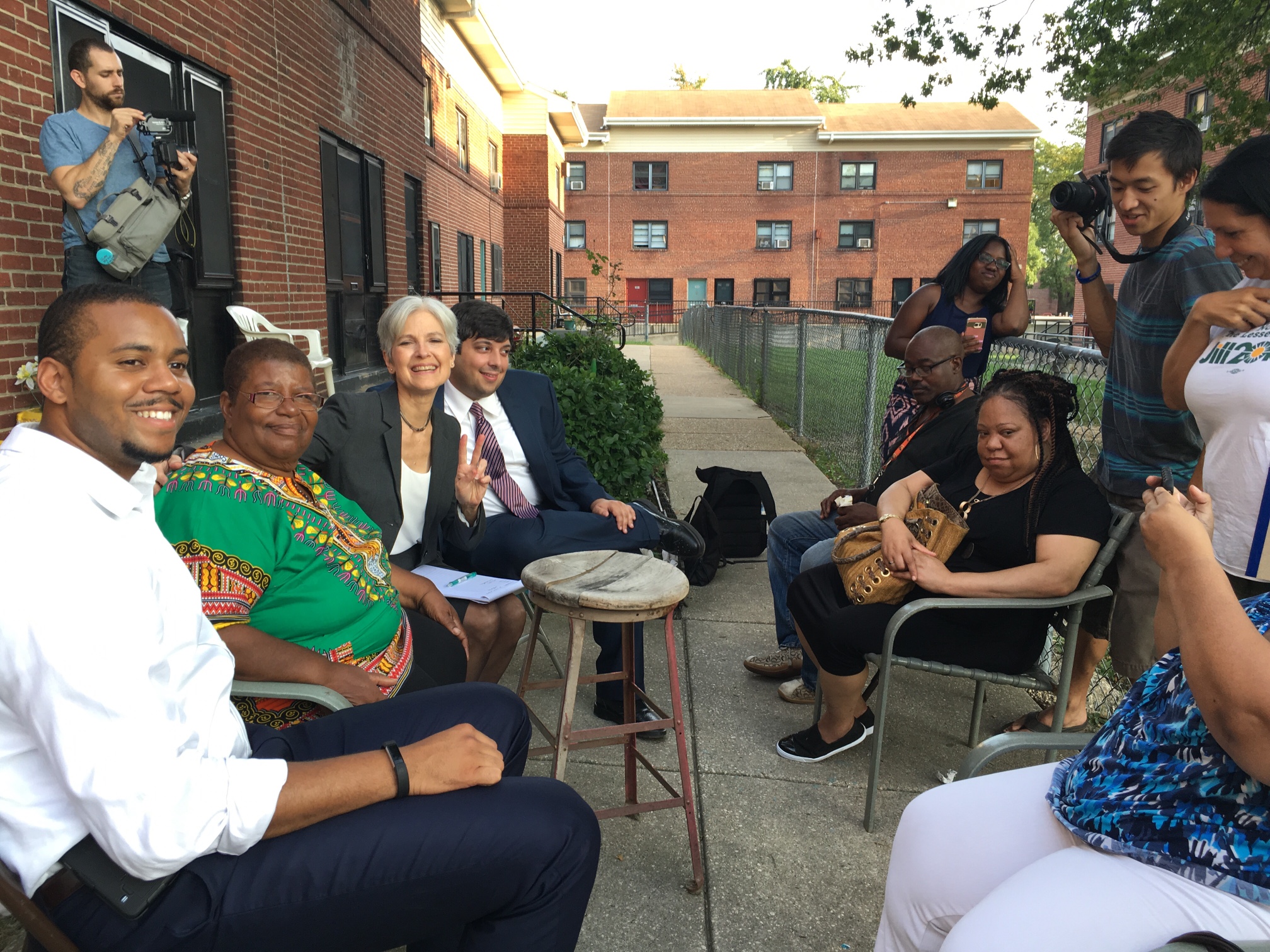 They discussed the effects of poverty, the movement to fight privatization of public housing and the notoriously corrupt housing authority in Baltimore, whose actions have led to gentrification and displacement of poor residents of color. They also called attention to the urgent need for real solutions to urban poverty, which affects nearly 1 in 3 children in the Baltimore area.

"Baltimore is ground zero for the fight against poverty," said Stein. "It's an inspiration to see the activists on the ground who are refusing to sit idly by while public housing is privatized and federal dollars are siphoned off into a corrupt local housing authority. And they will not accept political disenfranchisement any longer. We are so honored to be working with local hero Annie Chambers, a legend in her own time, who still leads the fight for justice in public housing. The Douglas public housing project lives up to the legacy of its namesake, Fredrick Douglass. It is organizing to end poverty and secure housing justice for their neighborhood and for all Americans."

Stein also discussed how she has made ending poverty and establishing a just and sustainable economy central to her presidential campaign, with her visionary plan for a "Green New Deal" to create 20 million jobs. She highlighted her support for Green Party candidates running for office at the local level who joined her at the event - Joshua Harris for Baltimore mayor and Ian Schlakman for city council - and praised Annie Chambers for her awe-inspiring organizing work in the local community.

"It was empowering to be part of a Green Party ticket," continued Stein. "Together we are offering solutions at the local and national level for jobs, housing, climate action, education, an end to violent policing, and a halt to the wars for oil that are draining resources that should be used for real security here at home."

"The issues that we face locally here in Baltimore are amplified on the national level," explains Joshua Harris, Green candidate for Mayor. "We are committed to grassroots change and going to war with poverty like Rev. Chambers and so many others have chosen to do, because this is about empowering people."

Ian Schlakman, Green candidate for Baltimore city council in district 12, added: "Dr. Stein's policies on crucial economic and racial justice issues are exactly the kind of leadership we need at a national level to lift up and empower the most impoverished communities in my district."

After the discussion at Douglas Homes, the group went on a tour of the neighborhood, listening to stories from local residents and organizing the local community around public housing issues and in support of Stein, Harris and Schlakman's campaigns. Dr. Stein also met Peter, a homeless veteran in the neighborhood, who expressed his support after a brief conversation with the presidential candidate.

The discussion and tour were livestreamed on Dr. Stein's official Facebook page. Links to the footage are below:

Below is a list of Green Party candidates running at state and local levels in Baltimore and Maryland: