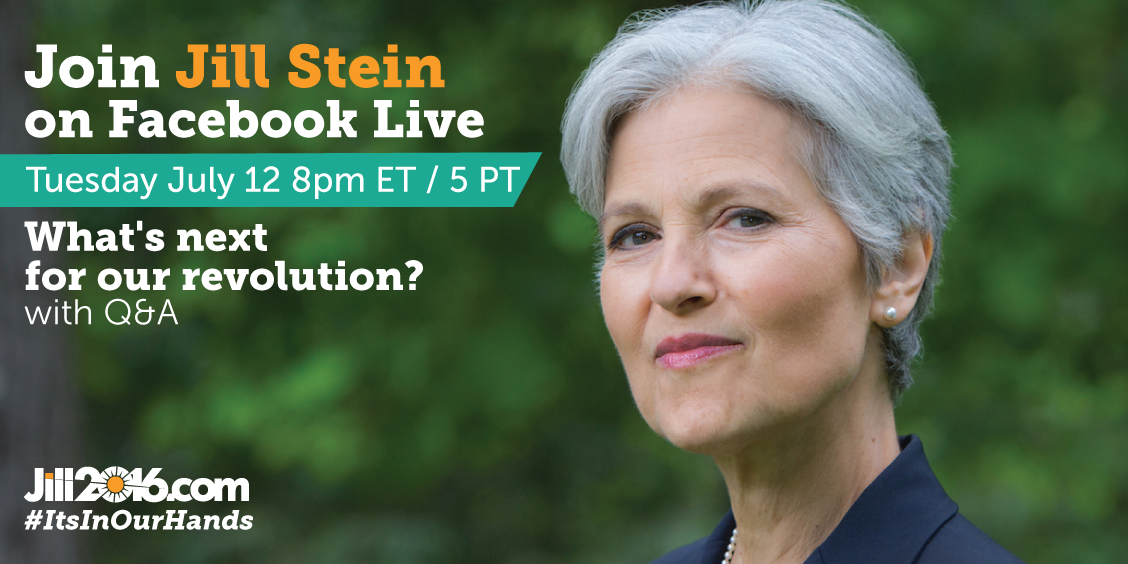 (Dr. Stein will host a livestream broadcast on her Facebook page on Tuesday July 12th at 8pm Eastern time on the subject "What's next for our revolution?")

"I join millions of Americans who see Hillary Clinton's campaign as the opposite of what they and Bernie Sanders have fought for. Despite her penchant for flip flopping rhetoric, Hillary Clinton has spent decades consistently serving the causes of Wall Street, war and the Walmart economy.

The policies she fought for - along with her husband and political partner, Bill Clinton - have been foundations of the economic disaster most Americans are still struggling with: the abuses of deregulated Wall Street, rigged corporate trade agreements, racist mass incarceration, and the destruction of the social safety net for poor women and children. The consistent efforts of the Democratic Party to minimize, sideline, and sabotage the Sanders campaign are a wake up call that we can't have a revolutionary campaign inside a counter-revolutionary party.

Sadly, Sanders is one of a long line of true reformers that have been undermined by the Democratic Party. The eventual suppression of the Sanders campaign was virtually guaranteed from the beginning with super-delegates and super Tuesdays, that were created after George McGovern's nomination to prevent grassroots campaigns from winning the nomination again.

Sanders, a life-long independent who has advocated for building an independent democratic socialist party similar to Canada's New Democratic Party, has said that his decision to run as a Democrat was based on pragmatism, but there is nothing pragmatic about supporting a party that for decades has consistently sold out the progressive majority to the billionaire class. This false pragmatism is not the path to revolutionary change but rather an incrementalism that keeps us trapped, voting for lesser evil again and again.

Each time a progressive challenger like Sanders, Dennis Kucinich or Jesse Jackson has inspired hope for real change, the Democratic Party has sabotaged them while marching to the right, becoming more corporatist and militarist with each election cycle.

Right now we have a real chance to change our rigged political system, and we must not squander this opportunity by pledging allegiance to a corrupt political insider who the majority of Americans do not like, trust or believe in.

What is most disappointing is that Sanders has refused invitations to speak to the Green Party, a truly democratic national party that has long championed the progressive stands that lifted the Sanders campaign to the top of national polls.

Fortunately, this November voters across America will still have the choice to cast a revolutionary vote to cancel student debt, achieve full employment and stop the climate meltdown through a Green New Deal, provide universal healthcare with Medicare for All, provide a welcoming path to citizenship, end mass incarceration and create a foreign policy based on international law and human rights. We need to commit to improving the lives of all Americans, not just the wealthy and special interests.

As the Sanders campaign's dominance of national polls has shown, our positions are shared by a majority of voters, and with the Green Party on the ballot in November the majority can vote for what they want and get it. Together we can beat both Hillary Clinton and Donald Trump, the two most unpopular and least trusted presidential candidates in American history.

I call on the tens of millions inspired by Bernie Sanders' call for political revolution, the 60% of Americans who want a new major party, and the independents who outnumber both Democrats and Republicans to reject the self-defeating strategy of voting for the lesser evil and join our fight for the greater good.

I ask the rising independent majority to demand our inclusion in the Presidential debates, for as Sanders proved, in fair debates we can rally the majority of Americans behind a plan for an America and a world that works for all of us.

I congratulate Bernie Sanders on running an impressive campaign within an undemocratic primary, and I thank Bernie for showing clearly how a grassroots campaign, armed only with a progressive vision and small contributions from real people, can win over the majority of Americans. Let's keep the revolution going and build it into the powerful force for transformative change that it is becoming. Together we are unstoppable."