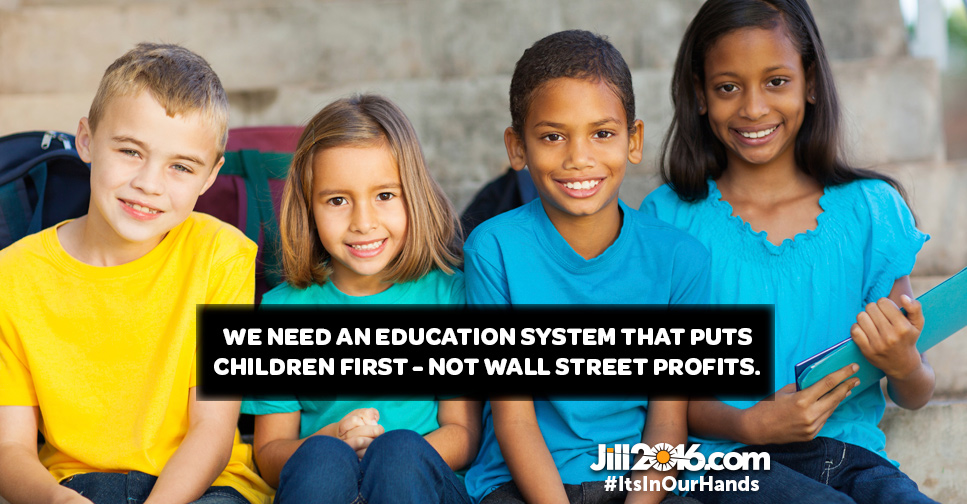 President Obama’s choice for Education Secretary has earned a failing grade from parents, students, teachers, and education advocates across the nation.

John King’s corporate education agenda has given Wall Street A+ profits, but has robbed our children of the quality education they need and deserve.

Sign my call today for a public education system that puts our children first, not corporate profits!

How do we know that Obama’s new Education Secretary is the wrong choice to be in charge of our schools? Let’s look at his report card.

John King co-founded Roxbury Academy in Boston, a charter school noted for rigid, authoritarian zero-tolerance policies that gave it one of the highest suspension rates in the state. In some years, students were punished with suspension at a rate ten times the state average or more.

As NYS Education Commissioner, King moved quickly to implement Common Core standards, which the Obama administration coerced schools into accepting by offering “Race to the Top” money while many school budgets were being slashed due to the recession.

Despite a firestorm of controversy across the state over the rushed implementation of high-stakes testing, as well as the lack of field testing and input from parents, teachers and students, King brushed off these concerns and insisted on ramming his plan through.

Warnings from King’s critics came true in 2013, when just 31% of students passed the new Common Core math and reading tests.

We’ve seen a common pattern with the education agenda pushed by Wall Street and standardized test corporations: high-stakes testing sets up public schools to fail, paving the way for the takeover of education by charter schools with their profits subsidized by taxpayer dollars.

Within two years after King’s disastrous Common Core rollout, 20% of students were sitting out the tests in protest. Even NY Governor Andrew Cuomo, who appointed King as commissioner, told state education officials that “Common Core’s implementation in New York has been flawed and mismanaged from the start.”

So John King gets an A for boosting corporate profits from high-stakes testing, but an F for improving educational opportunities and outcomes for students.

It’s outrageous that both Democrats and Republicans agree on an education agenda that comes from Wall Street profiteers.

Sign and share my call for an education system designed to educate our children, not to enrich corporate profiteers!

As President, I will halt the destructive push for high-stakes testing and school privatization. Instead of teaching to the test, we need to teach to the whole student for lifetime learning.

I will work together with educators, parents, and students to create a world-class public education system that works for people, not profit.