I watched the recount for Roosevelt Park Precinct 1. When I had to depart, the Stein and Johnson votes had been totaled, but the recount of Clinton and Trump votes was still proceeding. 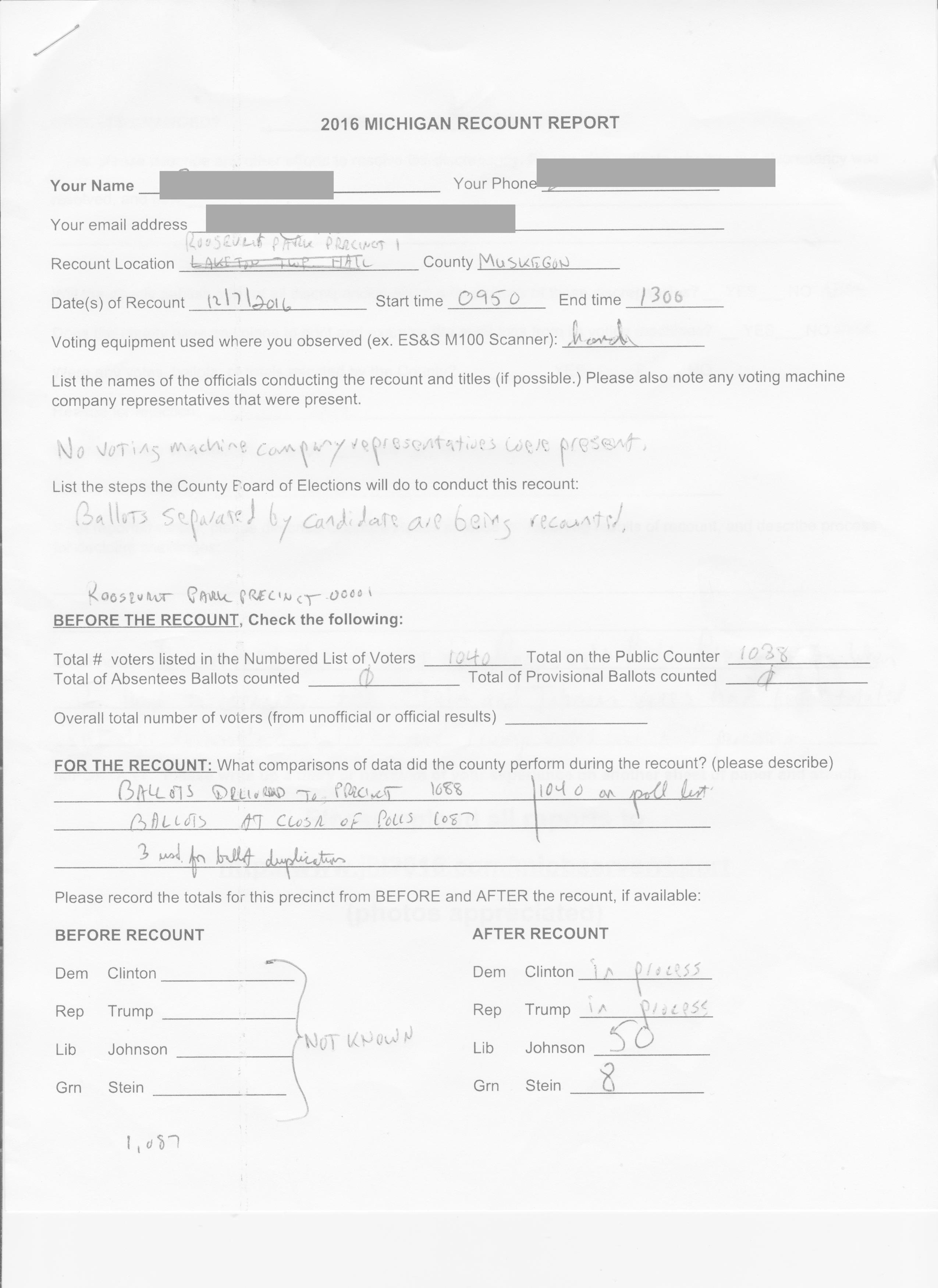 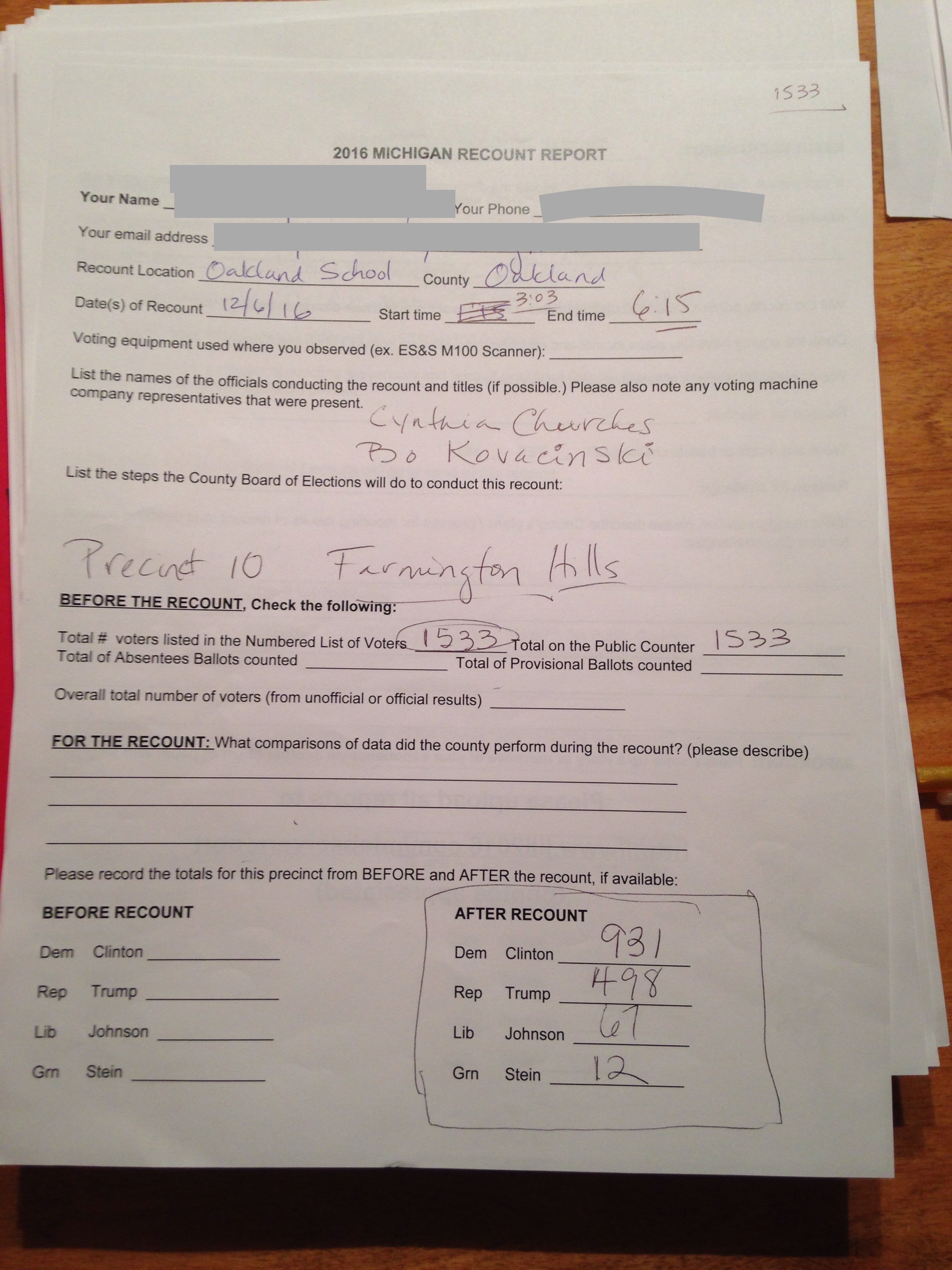 Everything seemed to go well. There weren't any bizarre anomalies. The only thing that was of note was that the recount for Allendale Township Precinct 1 Absentee Voters (AV), the vote for Trump changed from 272 to 274, picking up two votes from the Other category. 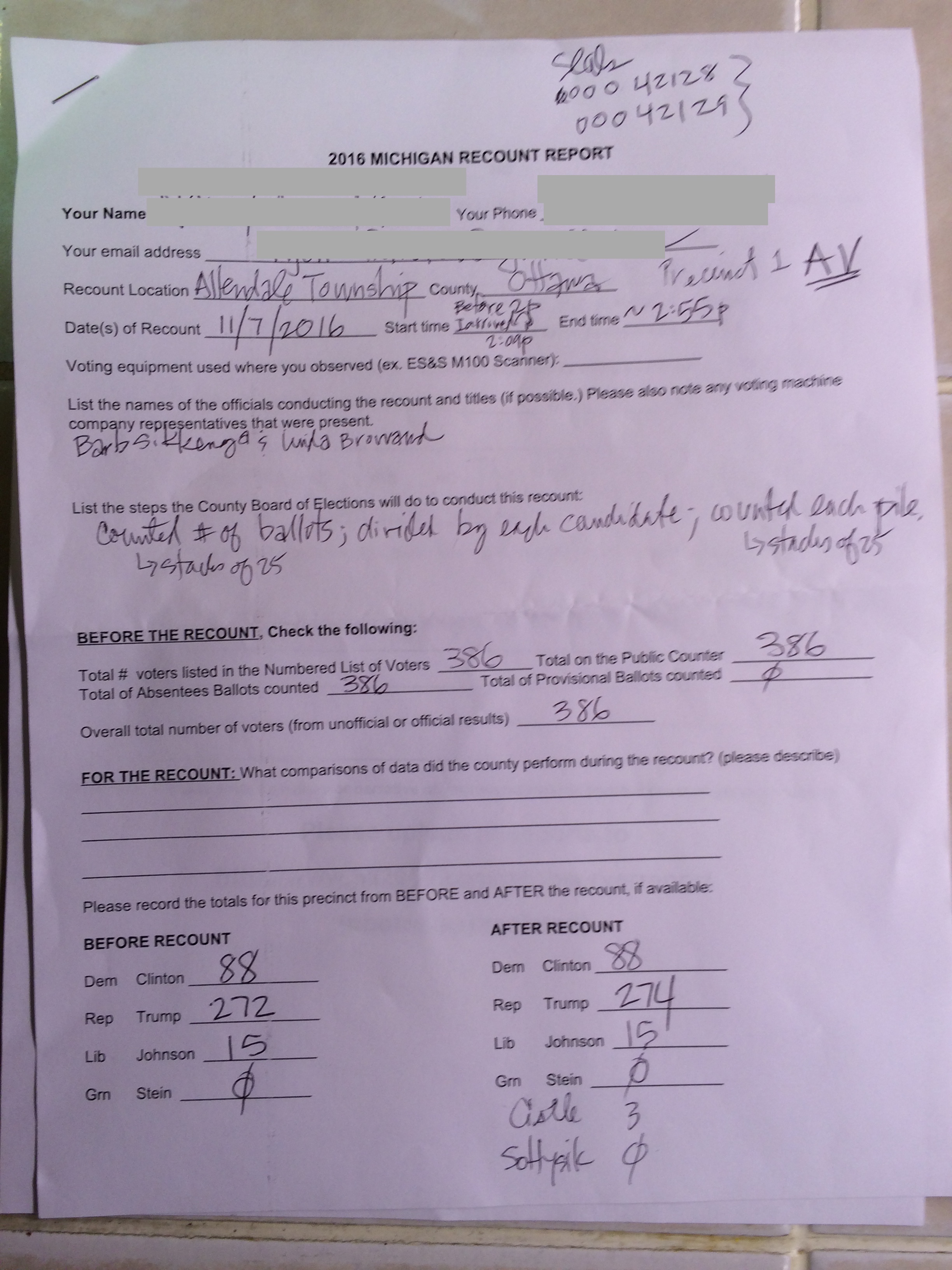 Official vote tabulators at my table were very professional and efficient. However, the Michigan recount rules favor the invalidation of counted ballots but do not equally favor the inclusion of uncounted ballots (i.e., the undercount, which is the suspected problem in Michigan.) For example, certain absentee ballots (e.g., overseas military) were submitted electronically, and then transcribed by election officials onto the paper scan forms used by regular voters. These transcribed ballots were called "Duplicates" and were supposed to be numbered in order to correspond to the number of the original electronic ballot. Recount officials were required to verify that originals and duplicates corresponded, and that they were not "double-counted." However, one precinct, heavily for Clinton, had several original/duplicate pairs that were not definitively corresponding (e.g., one original ballot had no corresponding duplicate number in the forms that were scanned and thus counted.) The election official ruled that the transcriber must have forgotten to label the duplicate, but that it HAD been counted, just not labeled. However, there was no evidence to support that ruling. An alternate possibility was that the original vote had not been transcribed, and thus not counted (i.e., an undercount). Furthermore, although it was not possible at the recount to PROVE that the original HAD been counted, it might have been possible to PROVE definitively that the vote was an undercount. For example, if NONE of the counted ballots exactly matched all the marked votes on the contested ballot (included races that were not included in the recount), that would prove that this particular vote had not been counted. However, election officials insisted they were only authorized to COUNT the presidential race, and would NOT examine any ballots or portions of ballots that were not included in that narrow definition of recount. So, in all likelihood Hillary Clinton lost that one vote (out of the 200 cast) in that precinct.

I arrived and was seated at a table where MI-Washtenaw-Ypsi(city)-Ward1-Pct1 was concluding. 3 things should match: pollbook+tape+#ballots. The pollbook did not match but at this location 2 out 3 is good enough to go forward. I observed the next batches in full: Ward2-Pct2, Ward1-Pct3, Ward3-Pct1, Ward2-Pct2. All of the aforementioned batches were absentee ballots.
My shift was from 5p-9p ET. I arrived early for training. I was told upon arriving that they would end the day at 7p or when the table I was assigned to finished the batch of precincts assigned. 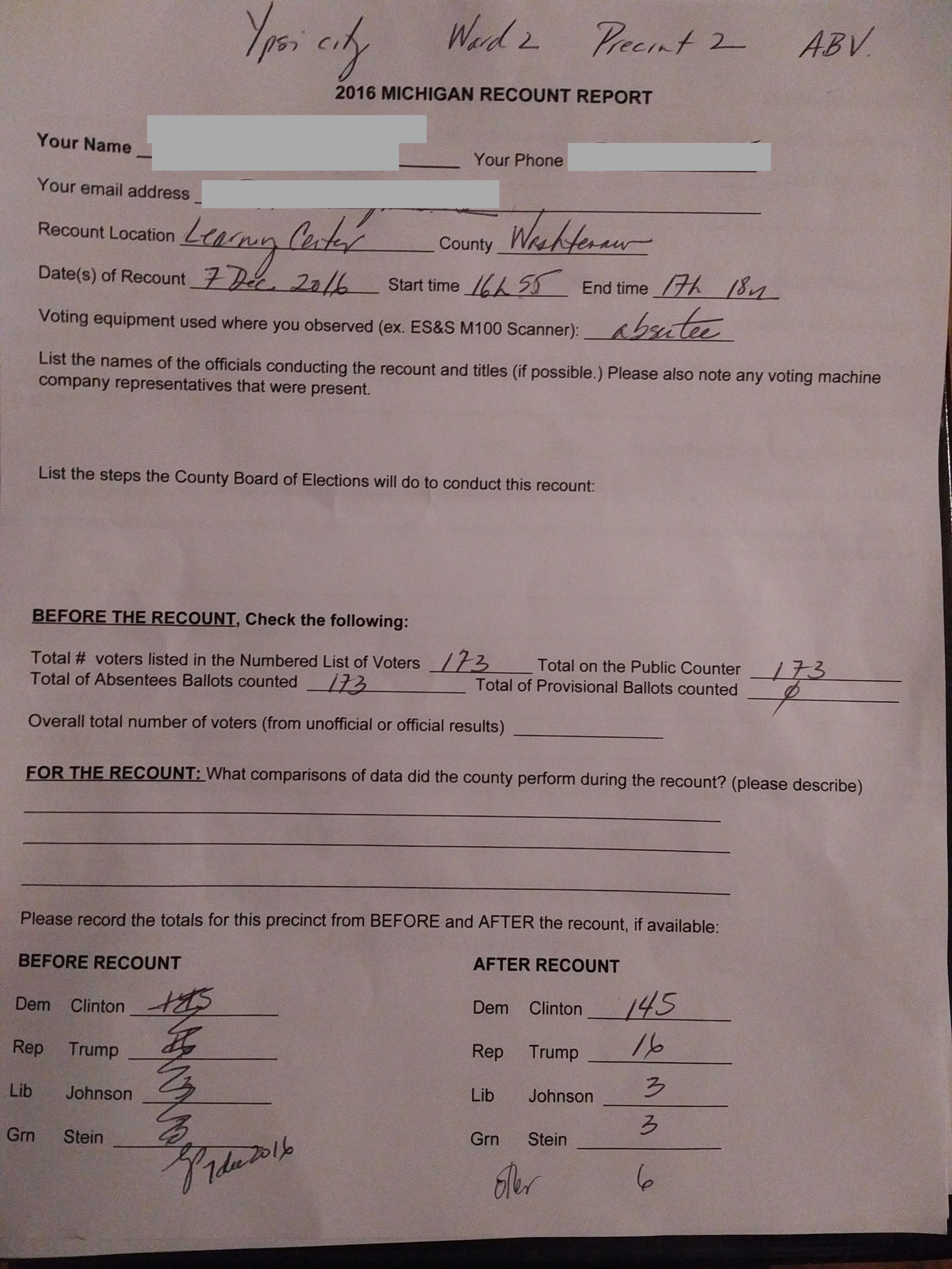 Branch Country, Bronson Township, Precinct 1. Count matched. All candidate counts matched.
A Trump represented showed up halfway through the counting and started acting as a challenger. I asked him whether he was the official challenger or if the first person who remained was. I felt he was purposely slowing the process. He eventually left and started bothering another table.

Branch County, Quincy Township, Precinct 2. The ballot container had a broken seal. The broken seal did not match the documentation. A note said the seal was broken in transit. County officials determined the precinct to be eligible for recount.

I did Moorland Township Precinct 1 in Muskegon county and the votes matched-742 total.