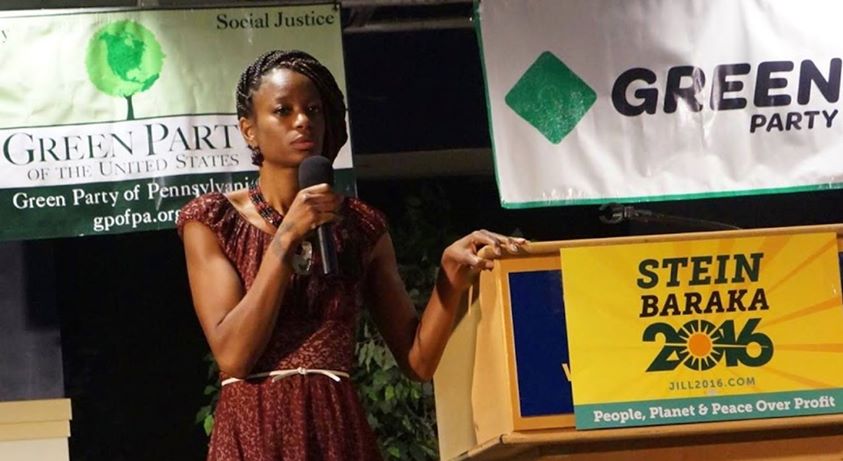 YahNé was a strong supporter of Bernie and BernieOrBust and is now an ardent spokesperson for Jill Stein for President. Her West Coast tour brings her to Palo Alto to discuss her work​ for​ justice,​ ​her journey from Democratic to Green Party supporter and why we need a Green New Deal.

Bay Area activists will join YahNé to connect the national and local dialogues on justice in America: Samina Sundas will discuss bridging cultural and religious gaps, relevant to the xenophobic, racist and anti-immigrant sentiments of this Presidential campaign. Laurie Valdez will talk about injustice and violence by police in our communities and efforts to seek justice for victims and families.

YahNé Ndgo is a surrogate of the Stein/Baraka campaign and a mother, writer, singer and Freedom Fighter. She uses her art to convey messages of positivity, create transformative projects, and to encourage others by sharing her struggles and celebrations, so that they know they are never alone. YahNe's authentic appearance on CNN during which she discussed her stance on the 2016 election race and her appearance on a MyPeoples.tv panel provided a national and international platform for her views. She is eager to use her visibility to expose more people to the important message of the Stein/Baraka Campaign, help the Green Party community build itself into the electoral arm of the Justice Movements, promote Global transformation, and help usher in The Better World she believes we are all eager for.

Samina Sundas, founder of American Muslim Voice Foundation, is focused on fostering friendships among all Americans and to walk on the path Dr. Martin Luther King Jr.’s paved for all of us. Samina is committed to work towards building an inclusive and beloved community. She enjoys working with and learning from youth and is especially interested in empowering young women to become leaders of tomorrow. She advocates civic engagement through volunteerism and believes that through education and social interaction we can build an inclusive and beloved nation where all of us feel safe and at home.

Laurie Valdez, founder of Justice For Josiah/Justicia Para Josiah, is the widow of Antonio Lopez who was shot and killed by a San Jose State University police officer in 2014. Bodycam footage from the officer involved was never released to the public. At the time, their son Josiah was only 4 years old. Laurie has been a voice for children like Josiah who suffer trauma and loss of innocence and security, lasting into adulthood. On their behalf, she demands transparency and accountability so the children affected can begin healing.